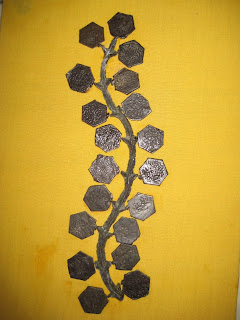 After a few years searching, at last I managed to acquire this museum piece antiquity belongs to Johor Empire Era ( 16th- 19th century). This is a complete “tree” of coins. This is a rare piece as I haven’t seen such a thing in Malaysian museums yet ( probably I haven’t explored enough).
Let me provide some insights of this “tree”. During the era of Johor Sultanate, tin coins or “Katuns” as they were known, were minted in a variety of shapes and sizes for use in the local markets. Some of these circular, others hexagonal or octagonal. A few of them carried full inscriptions indicating that they were intended for Johor, but the majority were inscribed only with the title such as “ Malik Al Adil” ( The Just King).
This tree was moulded by pouring molten tin though an opening in a mould which runs along a central channel into the side branches and finally into the coin moulds where the katun were cast. After the metal had cooled and hardened, the katuns were broken off and the excess metal of the central stem and brances was re smelted for further use.
Comparing this coins’ tree with my other katuns, I could match this katun with type C katun, hexagonal and class IV as outlined in Saran Singh’s The Encyclopaedia of The Coins of Malaysia Singapore & Brunei, page 123 ( SS30). The obverse was inscribed in Arabic, “Haza Al Masruf” means “ This is petty money” whereas the reverse of this katun was inscribed with “ Dar Al Johora” means “ of the city of Johor”. It has hexagonal shape with plain edge and typical weight of 1.7 gm each. Diameter range from 18-20mm. Made of tin and quite rare per se and RRRR if with the tree.
Interestingly, this tree has a “Kris” shape whereas coins’ tree from other Malay empires has a normal straight branch shape. “ Kris” is a asymmetrical dagger/sword indigenous to Malay world. It has a wavy blade.
This piece is absolutely a priceless relic.
Posted by abu dervish at 7:53 PM