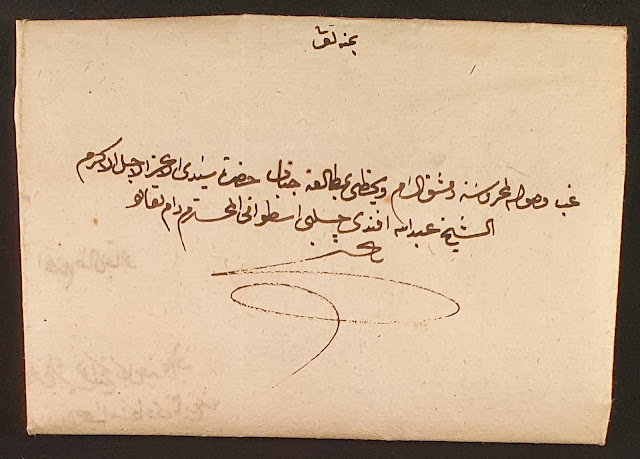 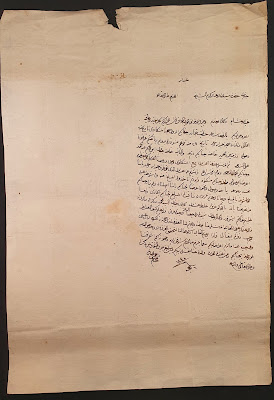 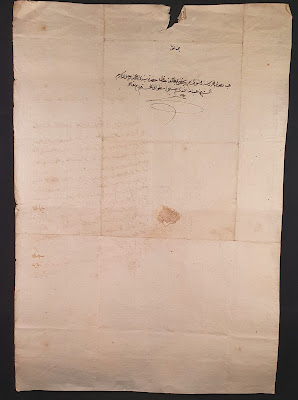 This is a document written in old Turkish. The document was originally folded and sealed. I couldn't figure out what type of document this is. It could be a legal document or a personal ones.  The letter is written in Riqaah script in black. It was signed and dated 1248 AH ( 1833 CE)
I don't have much information of this kind of manuscript and its writing tradition. I need to do more research on this manuscript and will update this entry later. I welcome any feedback on this letter. 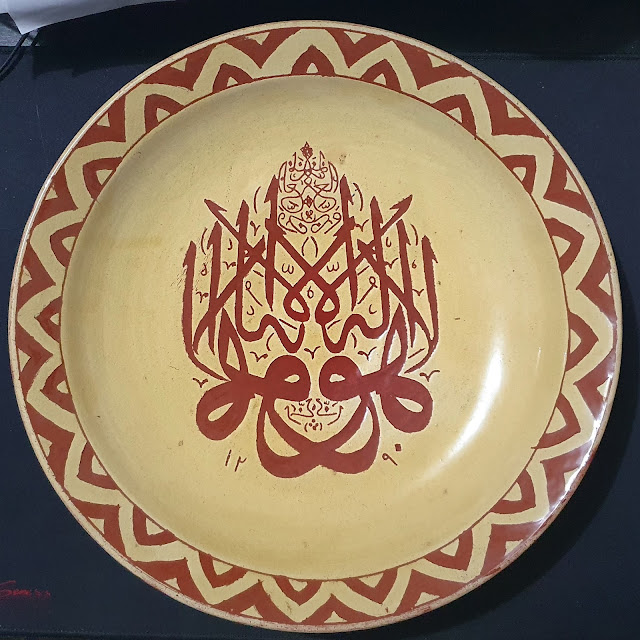 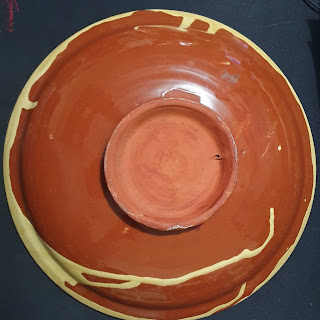 The arabic calligraphy is Thuluth style and with mirror image of لا اله الا هو ( There is no God except HIM). Also with date 1290 AH.

The calligraphy and the rim pattern were executed in a brown pigment with yellow base. 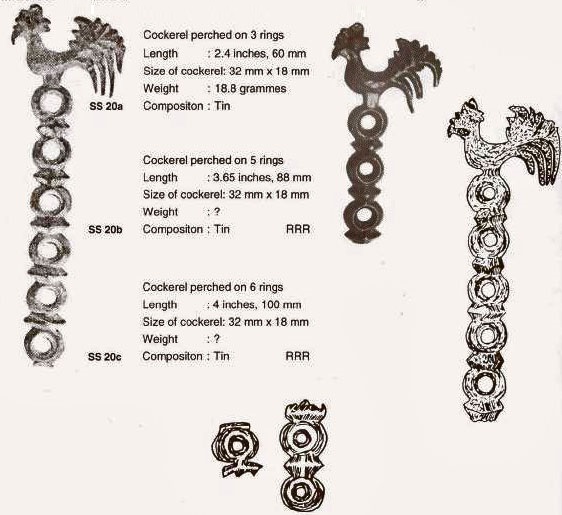 According to The Encyclopedia of the Coins of Malaysia Singapore & Brunei, the cockerel itself worths 5 cents of the Spanish Dollar with each ring  carries 1 cent in value. The rings were broken off for a small purchase of a few cents.This type of currency was first regulated during the time of Sultan Muhammad Jiwa Zainal Abidin Muazzam Shah reigning Kedah from 1710CE to 1773 CE. They were still in circulation till mid 19th Century.Kedah is located in the northwestern part of Peninsular of Malaysia. The name of Kedah originated from the Sanskrit word Kadaram. It is also known by its Arabic honorific, Darul Aman ( Abode of Peace).  The sultanate was the earliest one on the Malay Peninsular as well as one of the oldest Sultanate in the world. 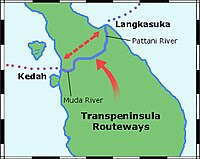 The kingdom began in 630CE as a Hindu Kingdom which the first king was Maharaja Derbar Raja who originally a defeated Persian king of Gemeron ( Bandar Abbas) who fled to Kedah. The people of Kedah found him to be a very smart & tactical man, so they entrusted him to lead them as the king of Kedah.
This kingdom is a Hindu kingdom however I couldnt find in any history book in regards to the faith of Maharaja Derbar Raja. In 630 CE, Gemeron is part of Sassanian Kingdom which Zoroastrian is the main religion.
Towards the end of 11th century, the 9th Kedah Hindu king, Dubar Raja II renounced Hinduism and conerted to Islam. He adpoted an Islamic name, Sultan Muzafar Shah and continued ruling Kedah from 1136 to 1179 CE. This sultanate continues to rule till today.
This mean the present Sultan of Kedah, Sultan Abdul Halim Muzaffar Shah has a direct link back to not just the first Kedah Sultan, Sultan Muzaffar Shah (1136CE) but also to the first Hindu Sultan , Maharaja Derbar Raja ( 630CE). Try to imagine someone with unbroken family lineage since 630CE till now. Unbelievable!!
Weight :TBA gm
Dim : TBA
Rarity : RRR
Denom : 10 cincin = 10 cents, cockerel = 5 cents
Material : Tin
Reference : Saran's SS20 , pg 260
Posted by abu dervish at 10:56 PM 1 comment: 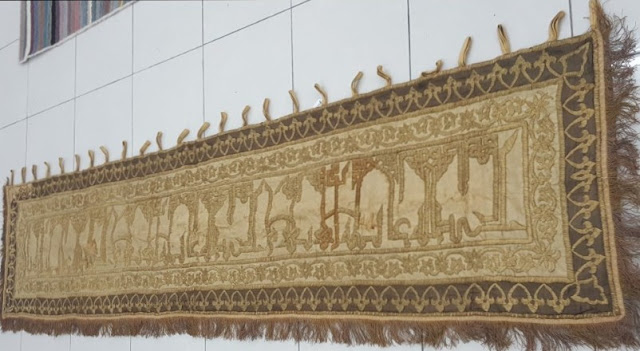 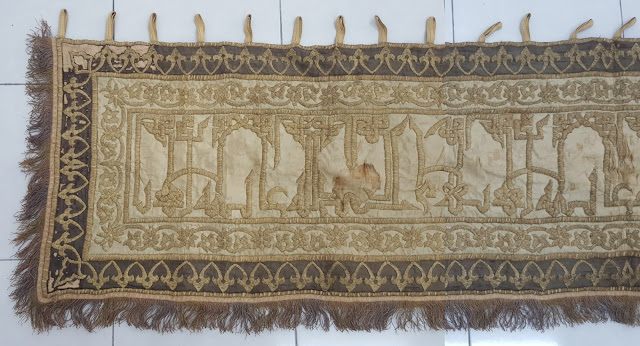 This is a very large and long embroided wall hanger originated from Iran. Arabic prayer emroided in Kufi script across the panel. I will update further on the content of this calligraphy later.
Item : Embroided Kufi Wall Hanger
Date : 1900 CE
Dim : 600mm x 1300mm
Design : Arabic Prayer or excerpts from Al Quran embroided in Kufi script
Posted by abu dervish at 1:03 AM No comments: 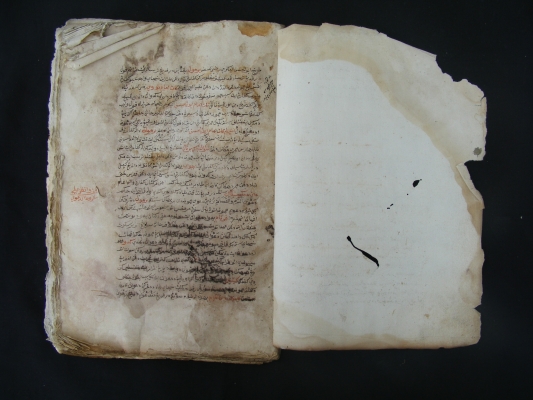 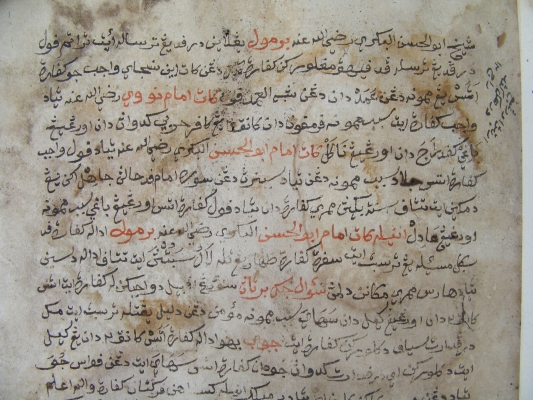 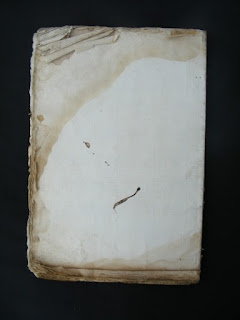 This is a large manuscript without cover written in Malay language in Jawi. Acquired from Sarawak Borneo.

This is a complete “tree” of coins from Johore Empire Era ( 16th-19th Century).
Johor is located in the southern tip of Peninsular of Malaysia as well as the most southern point of the Asian Continent. The name of Johor originated from the Arabic word Jawhar which means jewel. It is also known by its Arabic honorific, Darul Takzim ( Abode of Dignity). The Sultanate of Johor was founded by Sultan Alauddin Riayat Shah II , the son of exiled last Sultan of Malacca ( Sultan Mahmud Shah) in 1528 CE. Johor was part of Malaccan Sultanate prior to Malacca occupation by Portuguese in 1511 CE. 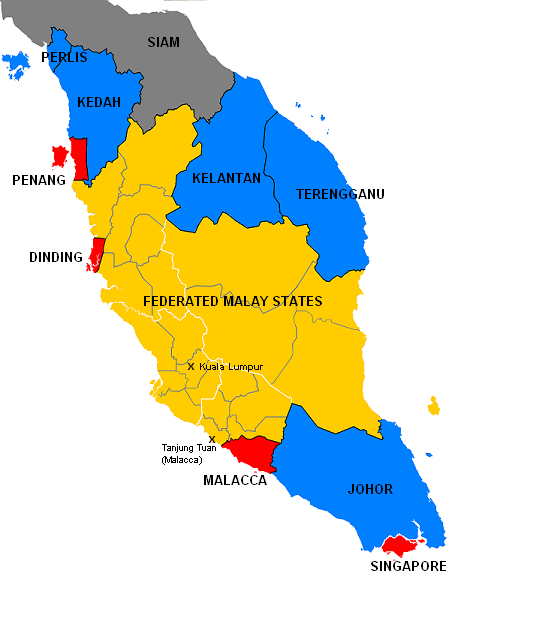 This tree was moulded by pouring molten tin though an opening in a mould which runs along a central channel into the side branches and finally into the coin moulds where the katun were cast. After the metal had cooled and hardened, the katuns were broken off and the excess metal of the central stem and brances was re smelted for further use.
Comparing this coins’ tree with my other katuns, I could match this katun with type C katun, hexagonal and class V as outlined in Saran Singh’s The Encyclopaedia of The Coins of Malaysia Singapore & Brunei, page 124 ( SS32A). The obverse has a large central dot surrounded by dots ( total 7 dots) whereas the reverse of this katun is blank.  It has hexagonal shape with plain edge and typical weight of 1.09 gm each. Diameter range from 16-17mm. Some of them look round in shape. Made of tin and RRRR if with the tree.
The other katun tree from the same empire has an S shape as if a kris whereas this one is straight like a tree. Check my other coin tree at
Johor Katun Tree Flower
Johor Katun Tree Kris

Posted by abu dervish at 2:44 AM No comments: 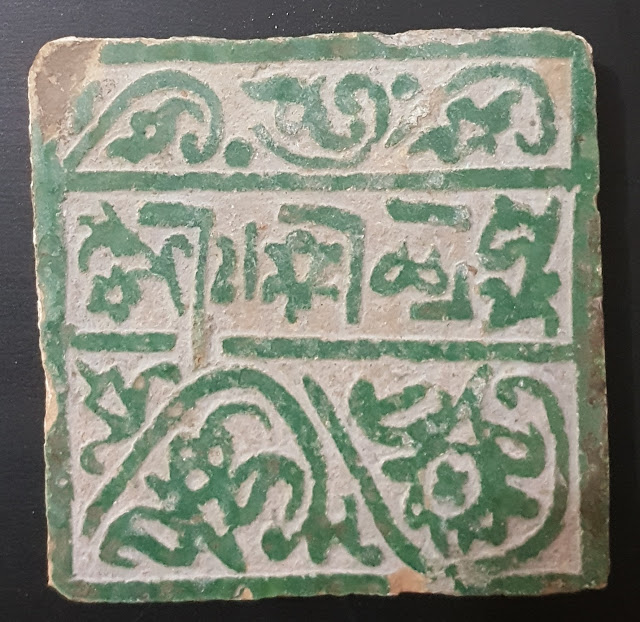 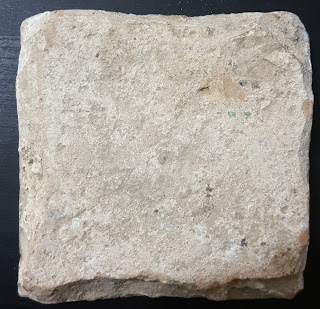 This is a rare ceramic tile from the Mellah ( Jewish Quarter) of Fes Morocco from 19th Century. The tile is decorated with floral and vegetal motives with some Hebrew alphabets in the middle row.
The inscription looks like  ברך  (Kaph , Resh , Beth ) pronounced as Barak means blessing.
Originally the word "barak"  used in Genesis 24:11 means " to kneel". However a derived word means "to show respect" or "to bless" is used in Genesis 12:2.


It is very common for Jewish who are settling in Mellah Fes to decorate their houses with tiles inscribed with blessings or word of wisdoms.
In a book, Pottery from Morocco 19th-20th c entury, by Rachel Hasson, "Fes was the most important centre for clay vessels in Morocco.... large quantities of tiles were produced in Fes and were used as an architectural decoration. Most items were decorated with paint and then glazed"

From an auction of similar tile which can be seen at the link below, 6 pieces of tiles were sold for USD4,841
Kedem Auction

Posted by abu dervish at 6:00 PM No comments:


In March 2018, I attended 4 days conference on Arabic Papyrology. It was held in Berlin in various museums & institutions.
It was an amazing conference with so many experts presenting their research especially on Arabic papyrus. In addition to that, we have the opportunity to access first hand papyrus collection in Berlin Papyrus Collection & the Manuscript Collection of the Berlin Staatsbibiotek. 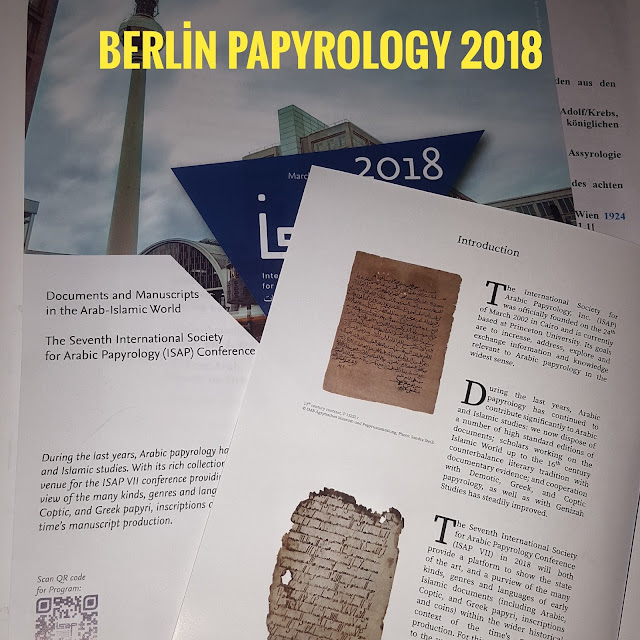 Below are the conference program : 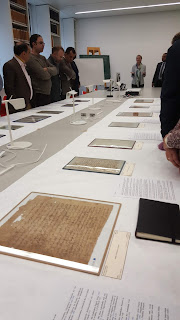 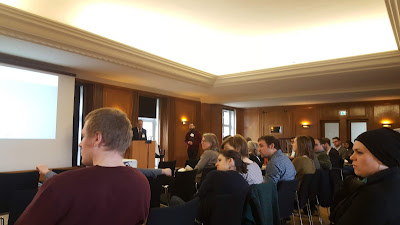 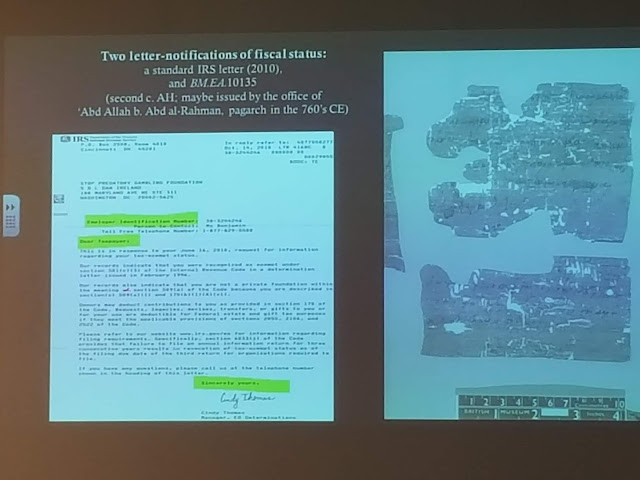 
This conference really enriched with some knowledge of Arabic papyrus. In addition to that I get to enlarge my network with experts in Papyrology. I was blessed to have met some prominent figures during this conference. To name fews :
Dr. Petra Sijpesteijn
Dr. Andreas Kaplony
Dr. Fred Donner
Dr. Beatrice Gruendler

Posted by abu dervish at 5:35 PM No comments: