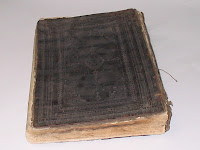 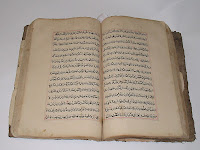 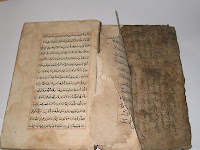 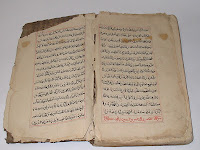 This is a beautifully written Quran manuscript originated from South East Asia. Its believed to have been written in 18-19th century. This manuscript is written in Malay-Naskh calligraphy in black ink on Dutch beige paper 15 lines to a page. Black leather binding beautifully embossed in a floral design.Some pages are missing, water stained and torn with fraying edges.All headings are written in red with every “ ayaah” or verses are separated by small red circle. The borders of the pages are ruled with red ( inset) and black ( outset).About 200+ leaves ( 400+ pages). I acquired this manuscript from a friend in Indonesia quite a while ago.