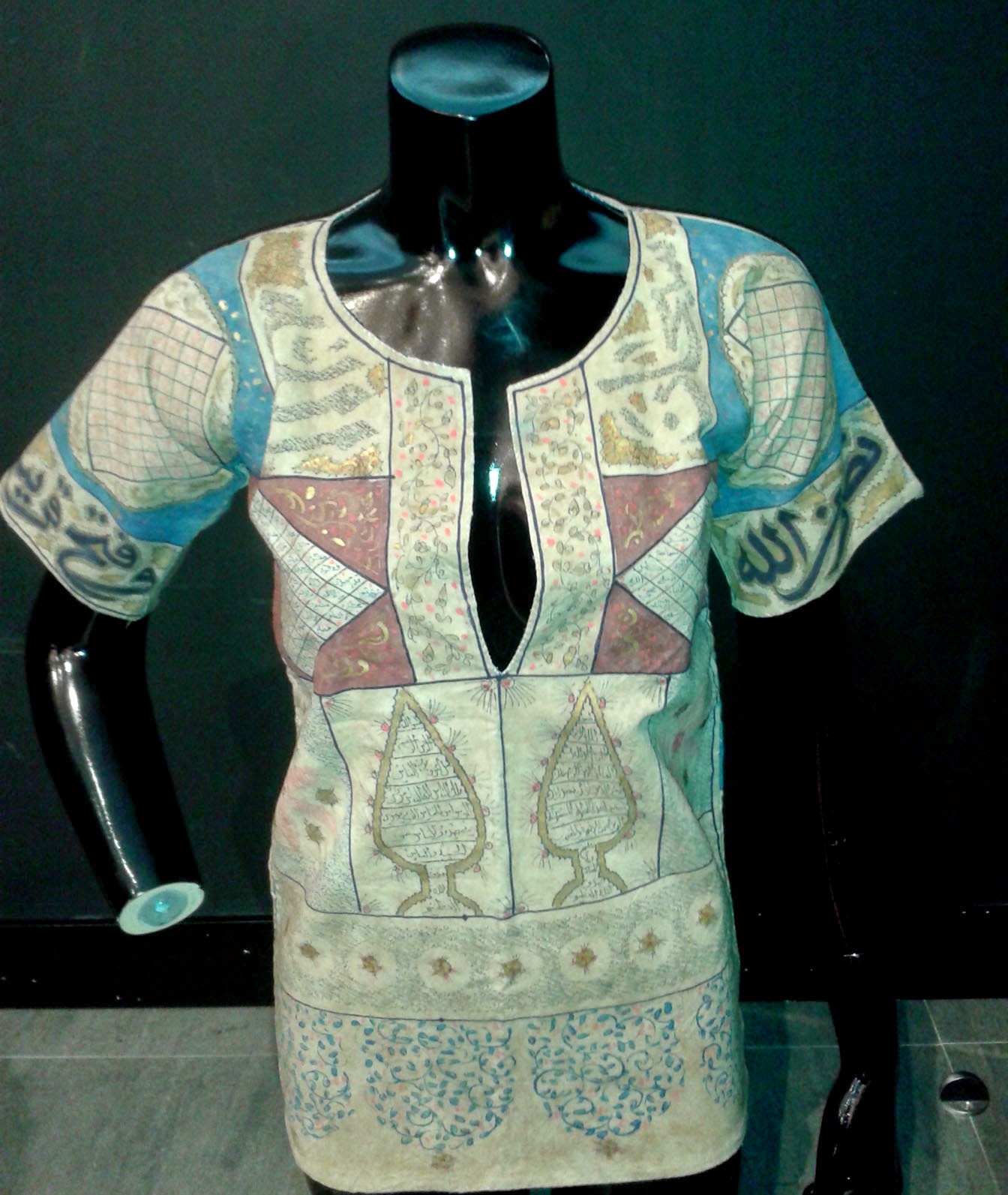 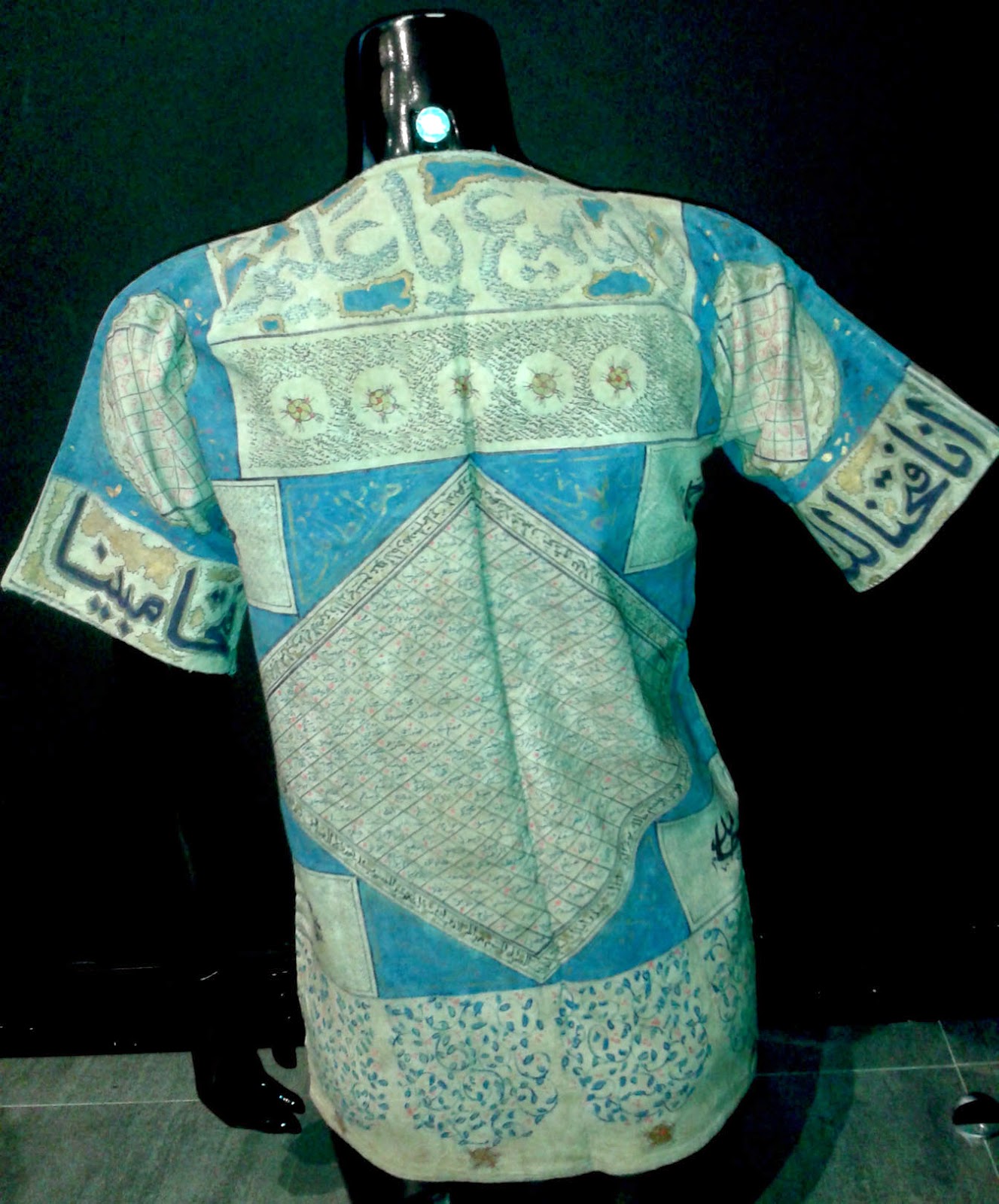 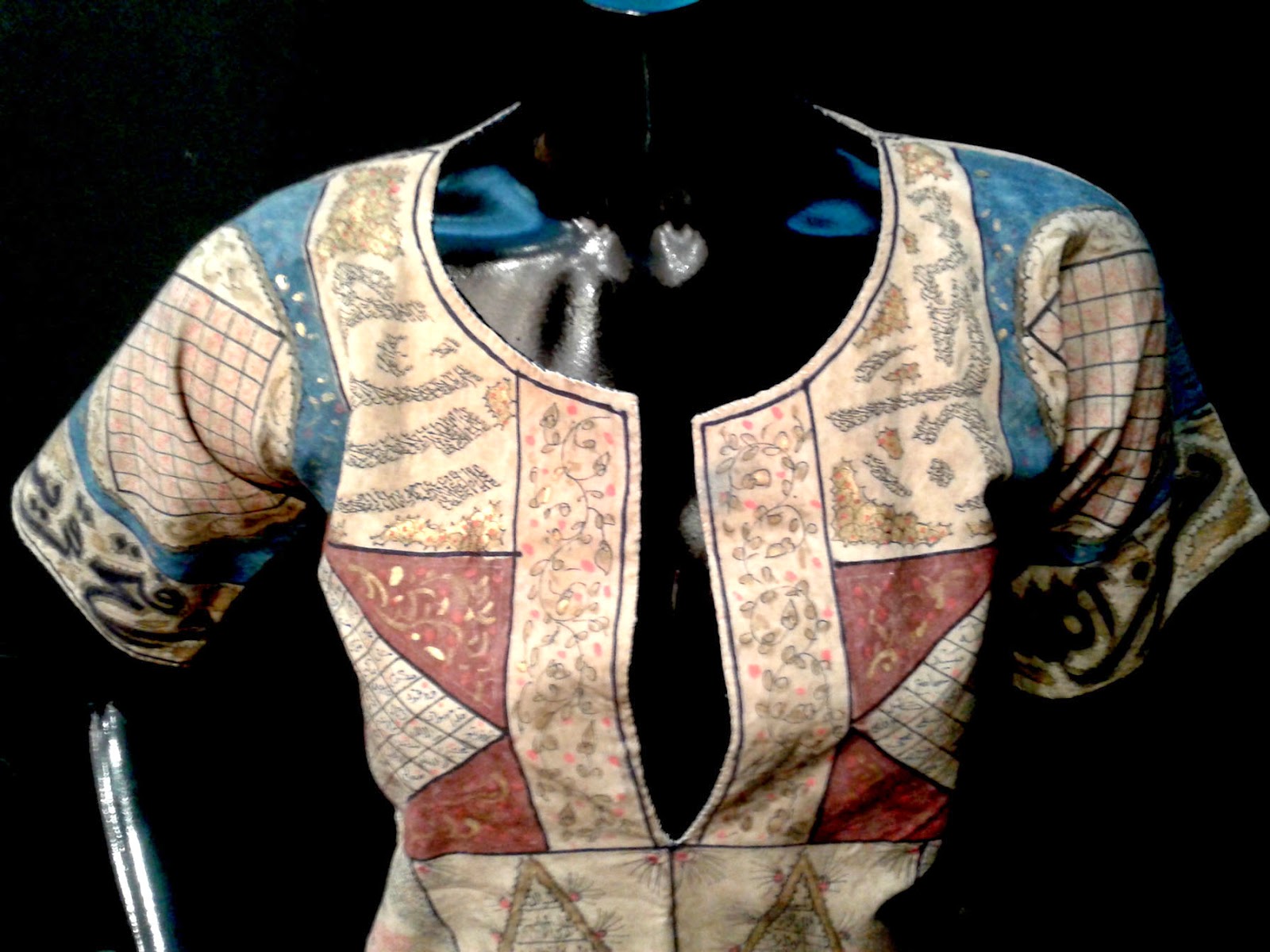 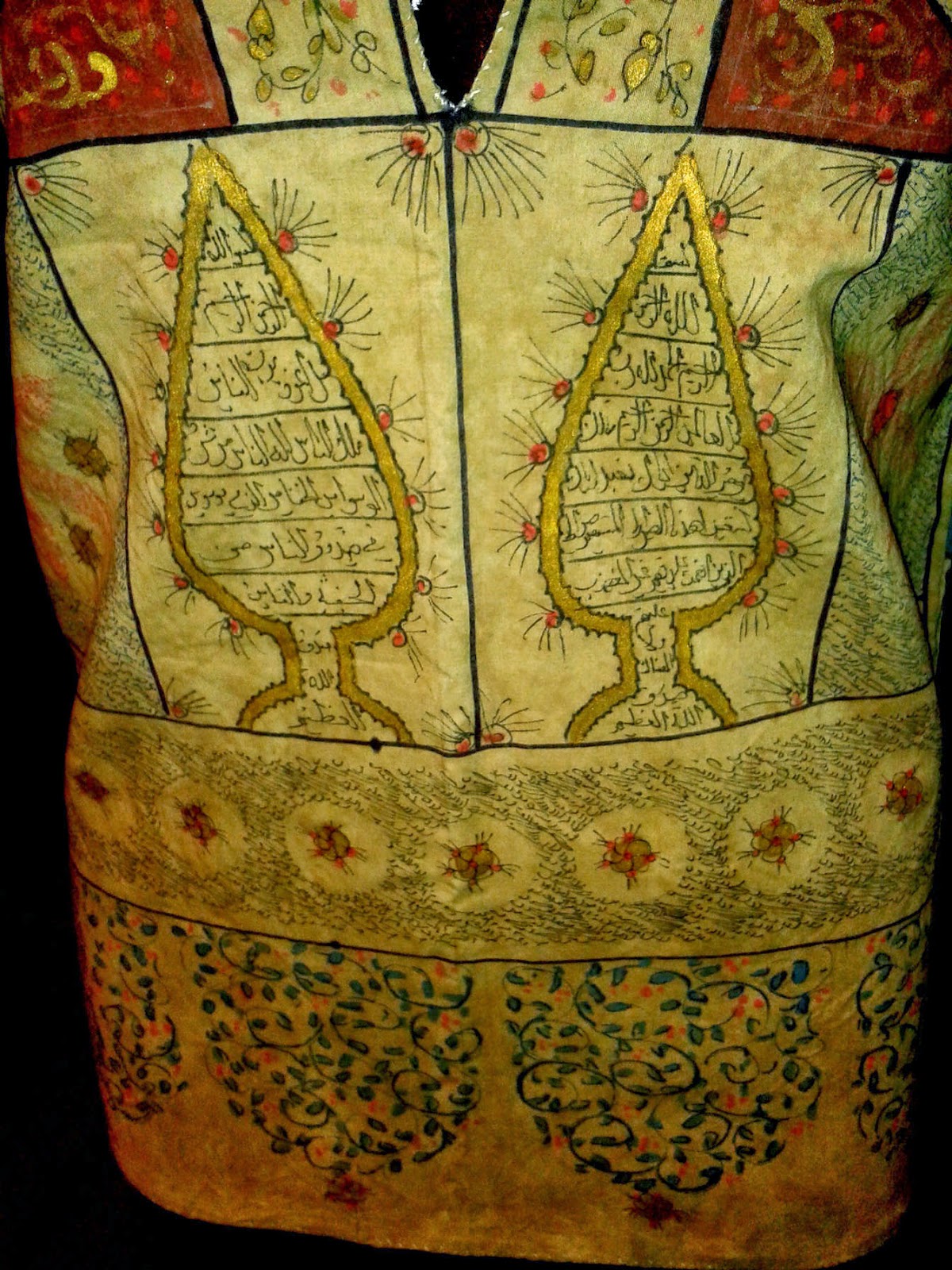 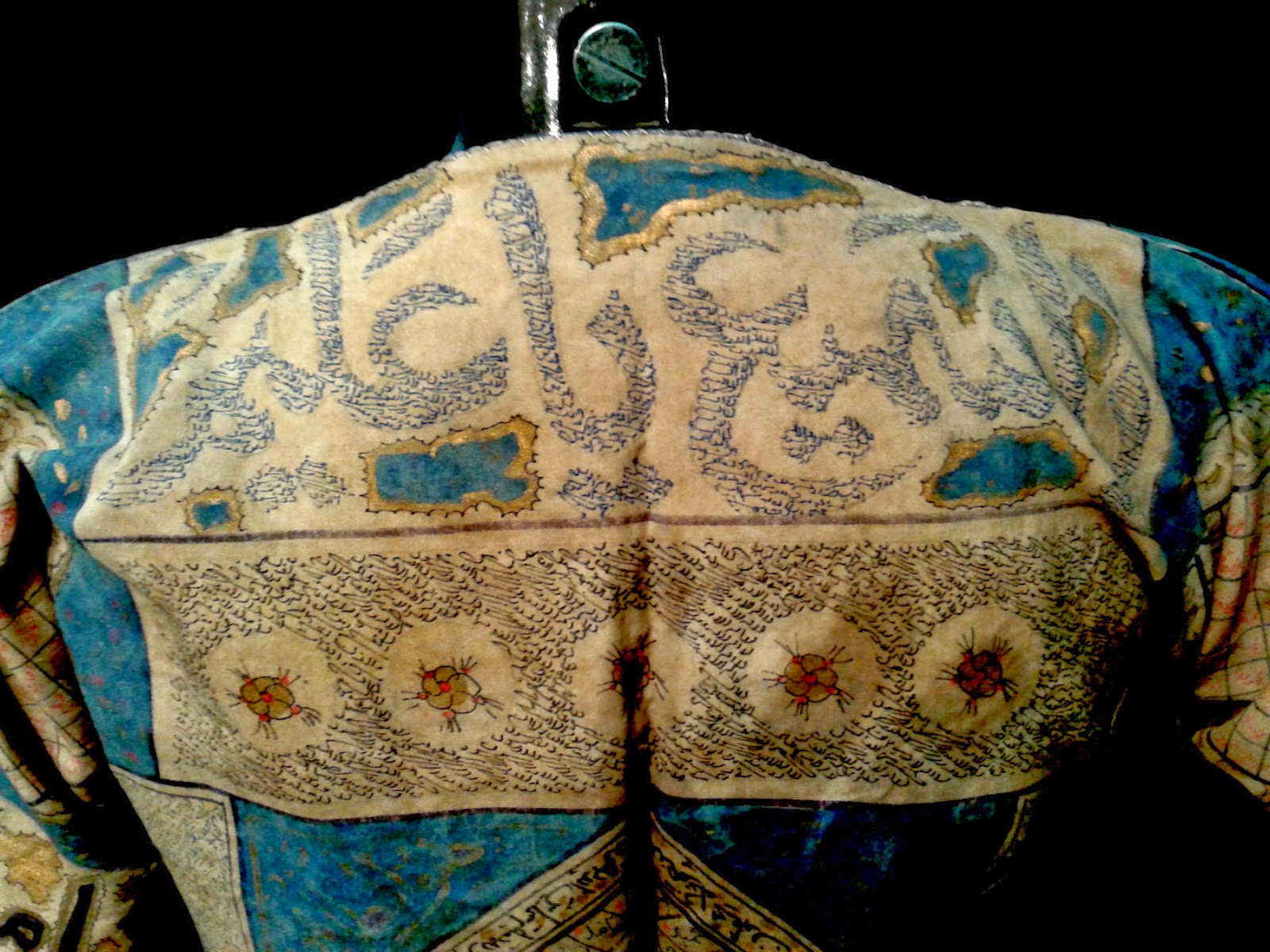 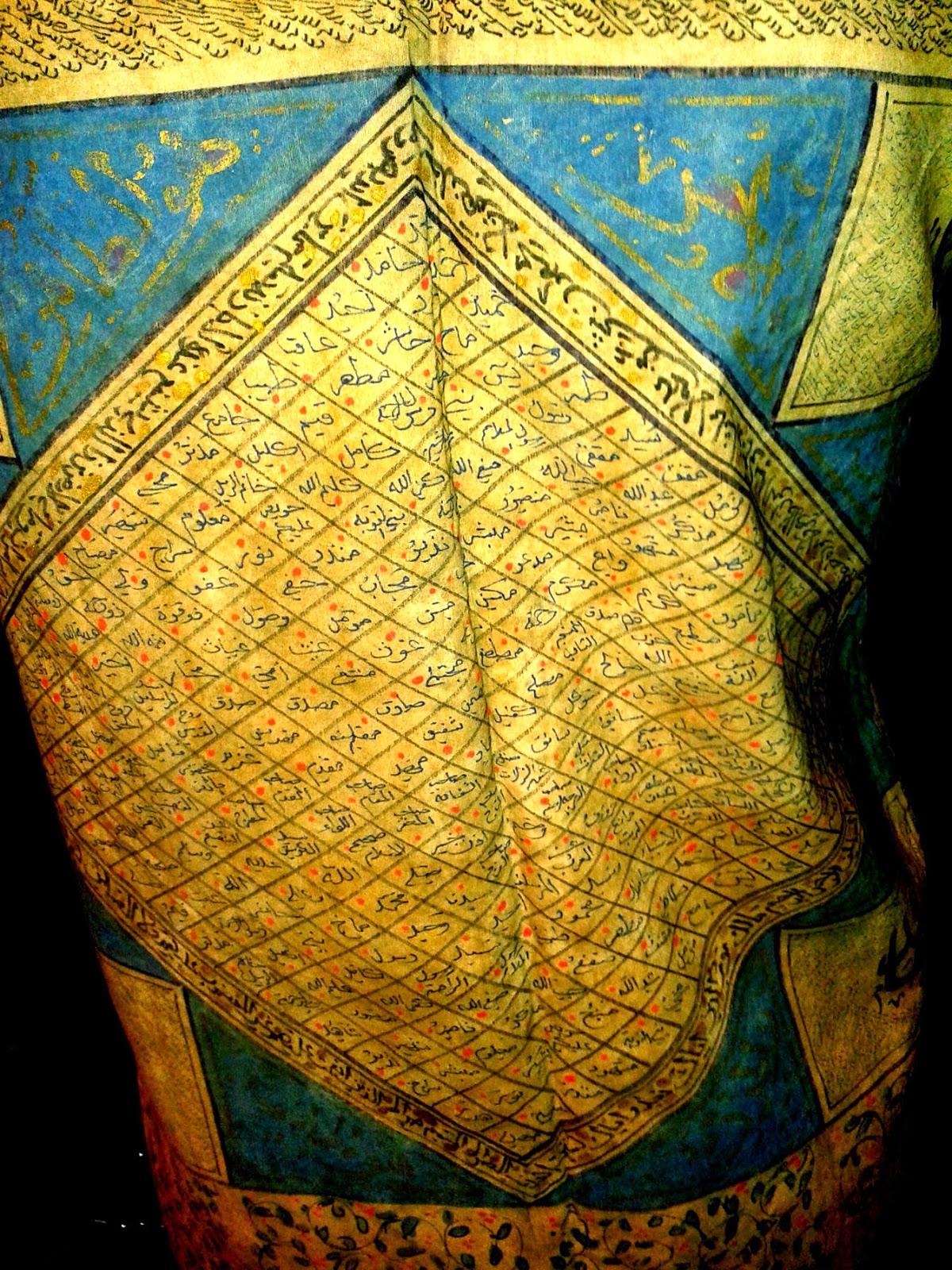 This is a Talismanic shirt acquired from Turkey estimated from 19-20th century. Entire shirt was written in Quranic prayers in different style and calligraphy. Beautifully decorated. A piece of spiritual art.
Length from top to bottom = 65cm
Length from sleeve to sleeve = 80cm

Here's an excerpt from the web about Talismanic Item

"A talisman is any object that is imbued with protective powers, and all cultures have manifestations of such objects. In the world of Islam, they bear Qur’anic inscriptions, astrological signs, and religious narratives. Many Muslims believe that an object that is inscribed with the word God (Allah) will protect the person who reads, touches, or sees it and that the word of God has the power to ward off evil. The surface of a talismanic object can be covered with prayers, signs, numbers, and decorative motifs, and the object is carried in a pocket, or rolled and placed in an amulet case; some talismans are worn as clothing.

Talismans that contain inscriptions with the names of prophets and religious heroes have the power to protect an individual from hardship and danger by acting as a conduit between the two.

The most efficacious talismans are those that are inscribed with prayers that evoke the name of God and the Prophet Muhammad and his companions. The ninety-nine names of God, verses from the Qur’an, and sayings of the Prophet Muhammad (hadith), for example, are appropriated and regenerated into texts that are meant to be good omens. Talismans that contain inscriptions with the names of prophets and religious figures have the power to protect an individual from hardship and danger by acting as conduits between these holy figures and anyone carrying the talisman. This is also true of devotional manuals by religious leaders (shaikhs) with passages stating that whoever reads them will be protected from demons and supernatural beings (jinn)  The written story about a prophet can be protective as well, with pictorial representations of that prophet and of the omens associated with him.
Talismans not only shield but guide their wearers; they are objects that reflect occult practices. Amulet cases (15.95.137), mirrors (1978.348.2), boxes,weapons, talismanic shirts or banners are capable of shielding a person or group of people from the forces of evil. When a person is confronted with an ethical dilemma, all he needs to do is consult the Qur’an or one of these objects for guidance." ( http://islamic-arts.org/2011/amulets-and-talismans-from-the-islamic-world)
Posted by abu dervish at 12:55 AM