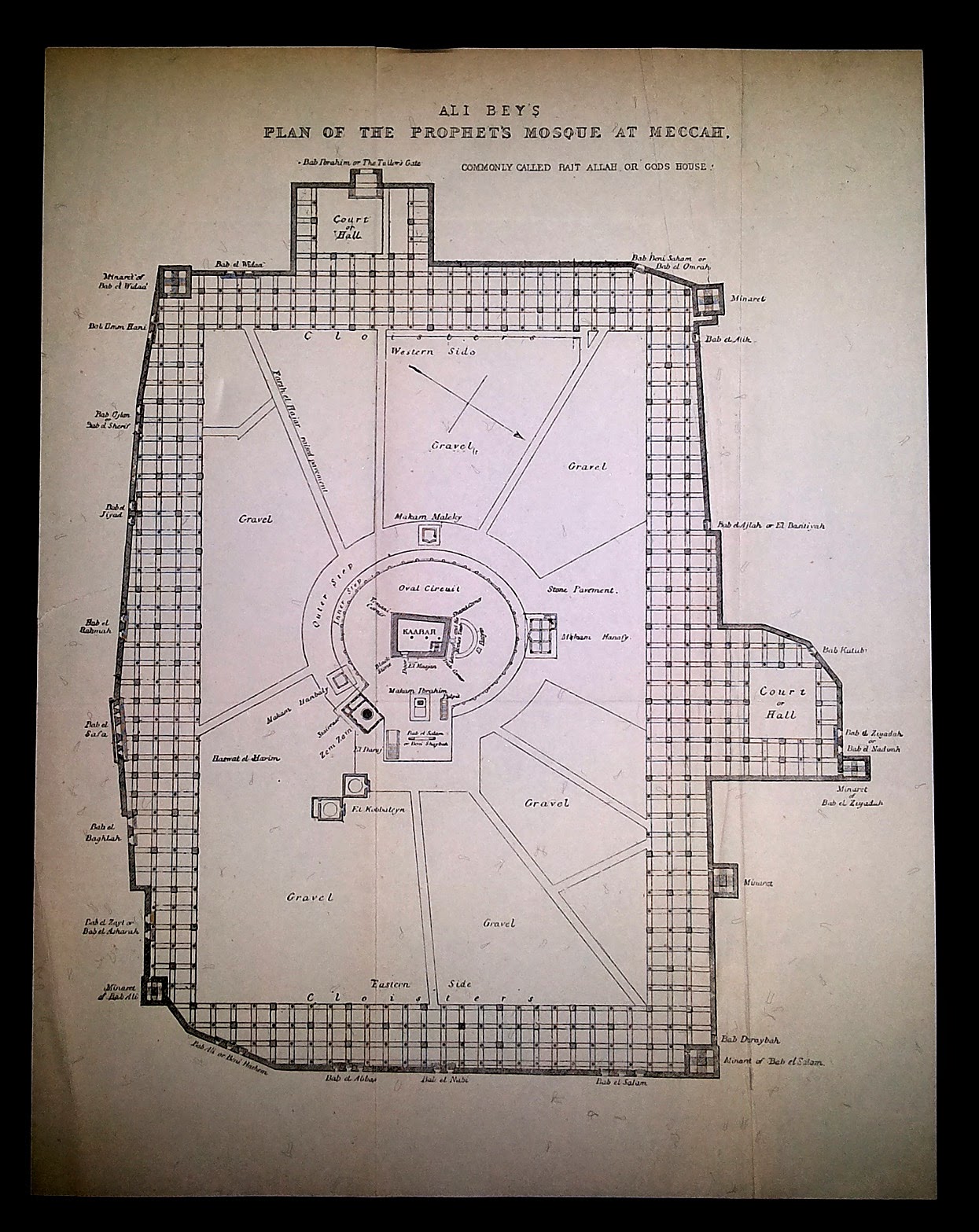 This is a print map dated 1879 of an Islam Holy Kaaba.

This illustration was made by Ali Bey who lived from 1766 - 1818 CE.
No one really know who he is. American Encyclopedia identified him as Domenech Badia i Leblich born in Barcelona Spain and used the name Ali Bey Al Abbasi in order to be a spy and infiltrate Muslim community and Muslim sacred places.
Proficient in Arabic language and travelled a lot to Muslim countries including Saudia Arabia.

Below what I found from Wiki :

Ali Bey al-Abbasi (علي باي العباسي), was the false name/pseudonym that Domènech Badia i Leblich (Barcelona; Spain, 1766 – Syria 1818), a Catalan explorer and spy in the early 19th century, used for several years in his travels to North Africa and the Middle East. Notably, he witnessed the Saudi conquest of Mecca in 1807.

After receiving a liberal education, Badia devoted particular attention to the Arabic language, which he studied in Valencia and London, and made a  special study of the manners and customs of Arabian lands. Under the name of Ali Bey al-Abbasi, pretending to be a descendant of the Abbasid Caliphs of the West, and in Muslim dress, he spent two years (1803-5) in Morocco on terms of high favor with the emperor. He then went to Mecca, at that time in the possession of the Wahabites, ostensibly to perform the hajj. On his way there, he stopped in Tripoli, Cyprus, and Egypt. On his way back, he stopped in Jerusalem and prominent places in Syria, and reached Constantinople in the autumn of 1807.
In Constantinople, Badia was for the first time suspected of not being a real Muslim. He fled, and returning home in 1809 entered the public service in Spain under King Joseph Bonaparte, on whose expulsion he was forced to leave the country. He published his account

of his travels at Paris in 1814 under the title Voyages d'Ali Bei en Afrique et en Asie pendant les années 1803 à 1807 (“Travels of Ali Bey in Africa and Asia during the years 1803 to 1807”).Badia wrote descriptions of the places he traveled to, which included modern Israel, Lebanon, Jordan, and Palestine, then considered part of Syria.
There was much mystery about Ali Bey when the account of his travels was published under this name. Bankes, writing in 1830, roundly asserted that he was a Jew, and many later writers have thought that he was a genuine Muslim of Moroccan origin, but of Spanish education. Actually he alleged to be a Muslim in order to enter

places forbidden to non-Muslims, including the Cave of Machpelah at Hebron and Mecca.
In 1816, a version of his account in the English language was published: Travels of Ali Bey : in Morocco, Tripoli, Cyprus, Egypt, Arabia, Syria, and Turkey, between the years 1803 and 1807.
In 1818, he set

out on a second journey, under the assumed name of Ali Othman, and, it is said, accredited as a political agent by the French government. he was murdered by British agents in Damascus. When he died in Syria in 1818 he was denied a Muslim burial because a cross was found in his vest.This, as suggested by some scholars, is conclusive proof that Ali Bey’s claims of Islam were a pretense maintained in order

to travel to Mecca and Medina.. In modern times scholars have demonstrated that he was a Catalan born in Barcelona; and actually he was very involved in the complex Spanish politic events in the 1808-1810 period of the Peninsular War.
A street in Barcelona (career Ali Bei) is named after him.