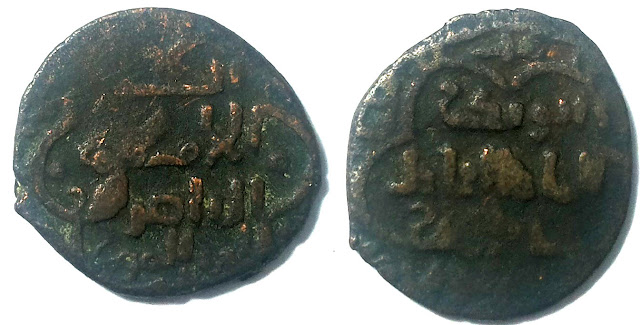 Compare this fals with other fals from Umayyad and Abbasid periods :
Umayyad Fals
Abbasid Fals

This is what I found from Wiki about this Emir,

Al-Adil I (Arabic: العادل‎, in full al-Malik al-Adil Sayf ad-Din Abu-Bakr Ahmed ibn Najm ad-Din Ayyub, Arabic: الملك العادل سيف الدين أبو بكر بن أيوب‎,‎ "Ahmed, son of Najm ad-Din Ayyub, father of Bakr, the King, the Just, Sword of the Faith"; 1145–1218) was an Ayyubid Sultan of Egypt and Syria of Kurdish descent. From his laqab or honorific title Sayf ad-Din ("Sword of Faith"), he was known to the Frankish Crusaders as Saphadin, a name by which he is still called in the Western world. A gifted and effective administrator and organizer,[1] Al-Adil provided crucial military and civilian support for the great campaigns of his brother Saladin (an early example of a great minister of war). He was also a capable general and strategist in his own right, and the foundation and persistence of the Ayyubid state was as much his achievement as it was Saladin's.
Al-Adil was a son of Najm ad-Din Ayyub, and a younger brother of Salah ad-Din Ayyubi. He was born in June 1145, possibly in Damascus. He first achieved distinction as an officer in Nur ad-Din Zengi's army during his uncle Shirkuh's third and final campaign in Egypt (1168–1169); following Nur ad-Din's death in 1174, Al-Adil governed Egypt on behalf of his brother Saladin and mobilized that country's vast resources in support of his brother's campaigns in Syria and his war against the Crusaders (1175–1183). He was governor of Aleppo (1183–1186) but returned to administer Egypt during the Third Crusade (1186–1192); as governor of Saladin's northern provinces (1192–1193), he suppressed the revolt of 'Izz Al-Din of Mosul following Saladin's death (March 1193). On Saladin's death he was governor of Damascus.