Book Review 15 : Misquoting Jesus : The story behind who changed the Bible and why, by Bart D. Ehrman 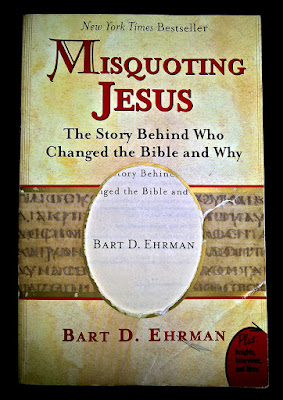 I purchased this book from Australia in 2009. Another controversial & revealing book from Bart D. Ehrman. Definitely recommend everyone to buy and read it.


In this book, Bart Ehrman unravels the truth behind mistakes and changes in the Bible especially in the King James Bible.
The author has successfully pointed out evidences of the alleged contamination from the beginning of the original manuscripts were copied till the current copies that are being used by the Christians all over the world. According to him "the original manuscripts were inspired, but the reality is that we don't have the original manuscripts. We don't even have the first copies of the originals, or don't have copies of the copies of the originals, or copies of the copies of the copies of the originals"
The fact is that all the earliest manuscripts that came to our hands where the Christianity is based upon are the not the original manuscripts that were copied by Jesus pbuh disciples. The 4 accepted canonical gospels - Matthew, Mark, Luke & John were assumed or attributed vaguely to these 4 disciples but they were not written by them. Christian scholars are very curious what the original words are and try to reconstruct the bible. Whatever the final product is, it will never replace the original manuscript.
During and after Jesus departed from this world, most Christians and Jews were illiterate. The author alleged Paul has used his literacy as highly educated Jews to convince pagans especially in Eastern Mediterranean about Chris's death and other doctrines. Later these letters were tampered by false teachers.
There are a few records in antiquity about discrepancies in Gospel copies.Such reports were made by prominent priest and bishops like Origen, Celsus and Dionysius.
The author also pointed out some chapter and verses were intentionally added to the Gospel such as in Ch 12, 1:1-18, 7:53-8:12 in Gospel John and last 12 verses & 16:9-20 in Gospel Mark.
In 1707, an independent scholar revealed a shocking findings by announcing 30,000 error places in Greek Bible translation from Steplanus.
There were efforts recorded in the past to rectify the Bible content but didn't make it to the final product.
The current Christianity was shaped after the conversion of Emperor Constantine into Christian and made the religion official by decreeing some gospels to be accepted as Canonical which he deemed supported his belief which is still clinging to some sort of Paganism.
Prior to the decree, there were some Christian groups who deemed Jesus as human and not divine. One of this groups is called Ebionites who insisted a Jew must be circumcised and followers of Moses law. They believed Jesus was born of Mary and Joseph and Jesus is adoptive son of God and died on cross.
Unfortunately after this Nicea Decree, all other groups were made illegal and prosecuted. Only one remained which is the official sect of Byzantine Empire, the Proto-orthodox which revered Jesus as Divine.