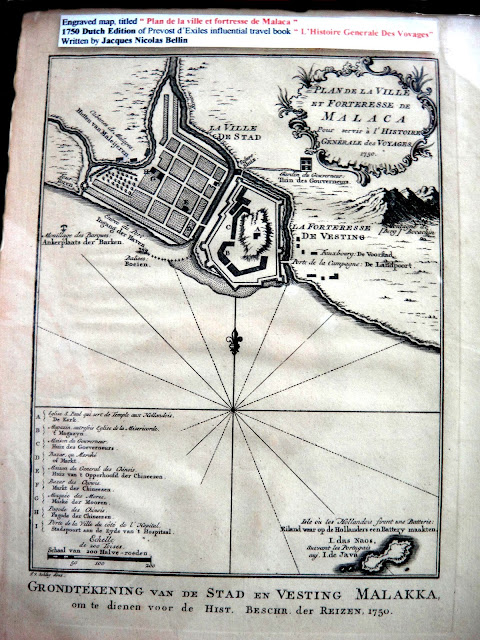 This is a print map dated 1750CE of  an occupied once Islamic Sultanate city, Malacca by Portugese.
Malacca used to be a centre of Islamic Sultanate established in the 14th CE and lasted for a centruy before is was occupied by Portugese in 1511CE.
This map was drawn by Jacques Nicques Bellin and part of his travel book titled Prevost d'Exiles.
Now Malacca ( Melaka) is a modern city in Malaysia.

In 1396, a Sumatran prince by the name of Parameswara fled his country out of fear of the attacking Majapahit Empire. Landing in Temasek, he killed the local ruler and established himself over the island that is now known as Singapore. A few years later, he was driven out by a Thai-controlled army and once again, was left scouting for a new piece of land.
Eventually, he moved up the West Coast of Malaysia and founded Malacca. Legend says that he was resting under a tree when he saw a mouse deer kicking his hunting dogs into the river and they attacked it. Declaring the place to be auspicious, he decided to set up shop and named the place after the tree he was resting under Melaka.
Eventually, Parameswara converted to Islam in 1414 and adopted the title of Sultan. Malacca was also growing into one of most important entrepot hubs for traders from across Asia, notably India, Arabia and China.
Unfortunately, this fame arrived at just the moment when Europe began to extend its power into the East, and Malacca was one of the very first cities to attract its covetous eye. The Portuguese under the command of Afonso de Albuquerque arrived first, taking the city after a sustained bombardment in 1511. The Sultan fled to Johor, from whence the Malays counterattacked the Portuguese repeatedly though without success. One reason for the strength of the Portuguese defense was the construction of the massive fortification of A Famosa, only a small portion of which survives today.
A Famosa ensured Portuguese control of the city for the next one hundred and fifty years, until, in 1641, the Dutch invested Malacca after an eight-month siege and a fierce battle. Malacca was theirs, but it lay in almost complete ruin. Over the next century and a half, the Dutch rebuilt the city and employed it largely as a military base, using its strategic location to control the Straits of Malacca. In 1795, when the Netherlands was captured by French Revolutionary armies, Malacca was handed over to the British to avoid capture by the French. Although they returned the city to the Dutch in 1808, it was soon given over to the British once again in a trade for Bencoleen, Sumatra. From 1826, the city was ruled by the English East India Company in Calcutta, although it experienced Japanese occupation from 1942 to 1945. Independence did not arrive until 1957, when anti-colonial sentiment culminated in a proclamation of independence by His Highness Tunku Abdul Rahman Putra Al-Haj, Malaysia's first Prime Minister.