This is a folio from a Quran. I acquired this leaf from a friend in Istanbul recently. He claimed this is from Mamluk.
Thanks to one of visitors here, Faisal Reza who convinced that this is from II-Khanid era ( 1256-1353 C.E)
I did some research and found that  this is quite true. The most obvious clue that this is IIkhanid's is that it has Persian translation ( Ta'liq script). IIkhanid Dynasty was based in Northwest Iran whereas Mamluk Sultanate ( 1250-1517 CE) was based in Cairo hence there were more Persian speakers within IIkhanid territory than in Mamluk's.
Going further, the Muhaqqaq script executed in this folio is more resemblance of Yaqut Al Mu'tasimi who is active from 1242-1298 CE. He was the most popular calligrapher during that period in Persia area and it make sense that contemporary calligraphers tended to follow his style.
There are many clues that this Muhaqqaq script was based on Yaqut's style. For example the the script lines rise slightly towards the left in comparison to the style of the founder of Muhaqqaq, Ibn AL Bawwab ( died 1022CE) which is typical straight line.The loop of Lam Alif is smaller in Yaqut's and the Alif is more vertical.
Comparing to sample of Quran from IIkhanid period, I have seen many were following Yaqut's style though a few of Ibn Al Bawwab's style Qurans also originated from IIkhanid territory..
For an example a Quran dated 1308CE was written in Baghdad by Yaqut's student and a few folios auctioned in Christie's claimed to be IIkhanid's were quite similar to mine and definitely Yaqut's style.
There is one similar folio ( better quality) sold in Christie's under sale 5499 for USD1387. I have seen also the price from USD250 - USD450 per folio in Ebay. 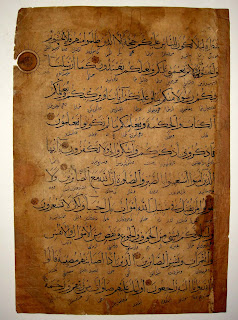 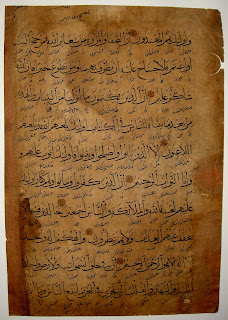