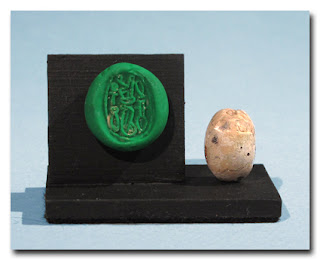 This is a genuine ancient egyptian steatite scarab with amuletic hieroglyphs inscription from 2040-1650BC. It was of Middle Kingdom Dynasty 11-13 of Egypt. Symbols of crown, ankh & neb carrying meaning " May The King be Healthy, and May Life be Happy" 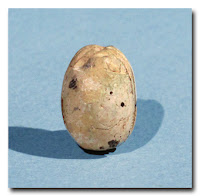 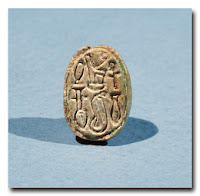 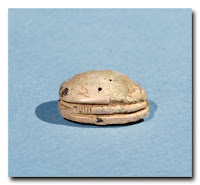 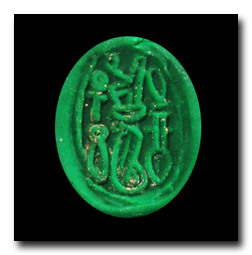 Below is an excerpt I quoted from Wikipedia in regards to this scarab tradition :

Scarabs were popular amulets in ancient Egypt. According to ancient Egyptian myths, the sun (Ra) rolls across the sky each day and transforms bodies and souls. Modeled upon the Scarabaeidae family dung beetle, which rolls dung into a ball for the purposes of eating and laying eggs that are later transformed into larva, the scarab was seen as an earthly symbol of this heavenly cycle. This came to be iconographic, and ideological symbols were incorporated into ancient Egyptian society.

Through different time periods, about 2000 years, the use of the scarabs became many and varied. As amulets, and a flat surface on the bottom (as a similar artifact of a paperweight), it became a surface with other utilitarian purposes. Other nations and regions, especially in the Levant, even came to reproduce Egyptian styles, or to adapt their use to their own gods or personal uses. They were also found as grave goods, amulets, talismans, jewelry types, or gifts of affection.

Beginning at the end of the First Intermediate Period scarabs became common.[1] They were often incorporated into tombs, as grave goods, or given as 'gifts'. Early on they were used for sealing goods. In the late Middle Kingdom they often bear titles and names of officials.[2] At this times they could also bear the names of kings. In this period they played an important part in the administration.

The Middle Kingdom of Egypt is the period in the history of ancient Egypt stretching from the establishment of the Eleventh Dynasty to the end of the Twelfth Dynasty, between about 2000 BC and 1700 BC, although some writers include the Thirteenth and Fourteenth dynasties in the Second Intermediate Period. During this period, the funerary cult of Osiris rose to dominate Egyptian popular religion.
Posted by abu dervish at 1:20 AM