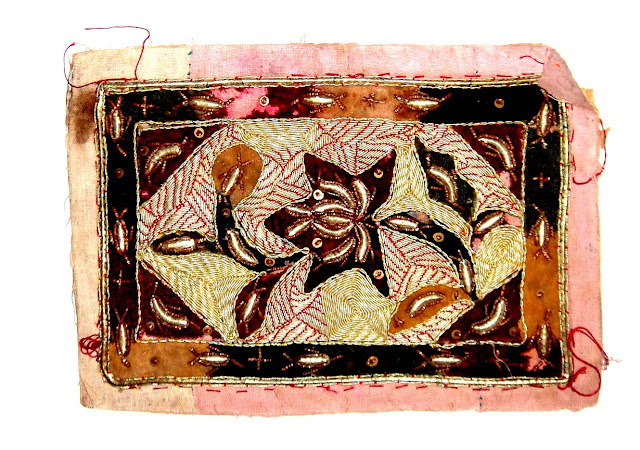 This is a product of  Malay artwork called tekat. It is a gold & silver thread embroidery practiced by the Malay from Malaysia.  These beautiful pieces are sewn onto both ends of a bolster ( bantal peluk) as part of  the bridal decorations which is typical in Malay weddings. Traditionally, to have the entire bridal daise and chamber decoration done in tekat is almost a must. These days, one doesn't have to worry about creating a tekat arrangement for the wedding. In Malay wedding, its customary to use the service of "Mak Andam" or a wedding planner. They have almost complete bridal decorations arrangement and lend them out for a very reasonable price.
Tekat originally was a court art and gained popularity by the 15th Century. It was thought that this art originated from Ottoman Empire and brought into the royal court of the Malay Kingdom by the traders.
Compare with the Ottoman thread embroidery below :
Ottoman Embroidery Art

In this sample, the gold/silver thread was stitched in a patterned way over a piece of of a velvet fabric. Motifs of foliage and floral were used as Islam prohibits using animal motifs. I believed these samples from early 20th Century CE.