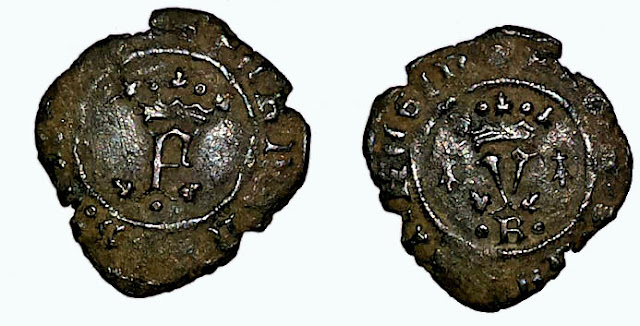 This is a coin from the era of King Ferdinand & Isabella reigning Spain from 1469 - 1504 CE.
These are infamous royal couple who drove Muslim out of Spain in the 15th Century.

Below is an excerpt from Al-Islam on the fall of the last stronghold of Andalusia in Spain:

1491 is the date for the Castilian and Aragonese seizure of Granada, on the 2nd of January, ten months before Christopher Columbus "discovered" America (or was it the Bahamas, and the Caribbean coast) certainly not the United States as we know them today). Much water has flowed under our bridges since then and into the broad Atlantic that Columbus and his three ships crossed that same year.
The city and kingdom of Granada in south-eastern Spain represented Islam's last stronghold on the Iberian peninsula. Washington Irving (no kin of mine, but an excellent writer) during his service of the United States legation in Madrid, interested himself in this period of Spanish history, and rescued the Alhambra from the horde of gypsies he found encamped there. Then in Lindaraja, the beautiful two‑windowed room overlooking the courtyard and city, he wrote his Tales from the Alhambra and went on to chronicle that fascinating period in Spanish history. He also wrote an excellent biography or Sirah of the Prophet that we should rescue today from the strange spellings of that early age of Orientalism.
The Treaty of Granada, which had been drawn up in the previous year, 1491, between representatives of the crowns of Castile, Aragon and Granada, conceded this last city and its kingdom to Castile. In this treaty, the Granadines were guaranteed their religious liberty. The Philadelphia Quaker Henry Lea has written on the subsequent history when that solemn treaty was broken by a Catholic churchman, Cardinal Francisco Xhnenez de Cisneros.
At the end of the 15th century, the five kingdoms of the Iberian peninsula, or what we now call Spain and Portugal, were: Castile, Aragon, Granada, Navarre and Portugal. Aragon actually had three capital cities, two of which, Valencia, and Zaragoza, were known for their active Muslim citizenry. Barcelona in Catalonia, was not so famous, although it is named after Hannibal's uncle Hamilcar Barca and his family, another Semitic influence that left this place name on the Peninsula. Navarre, south of the Pyrenees, was taken by Ferdinand of Aragon in 1512.
1610 and not 1492 should be our cut‑off date for Muslim power in Spain, even though that last century and a quarter saw Islam in clear decline, fighting a losing, rearguard action. We need rather to follow the fate of the remaining Spanish Muslims, not only in the defeated king­dom of Granada, but also in Castile, Aragon and Valencia, where talented and industrious Mudejar artisans were active.

Isabella I (1451-1504), Queen of Castile, called la Católica ("the Catholic"). She was the daughter of John II of Castile and León by his second wife, Isabella of Portugal.

The union of the Spanish kingdoms of Aragón and Castile was effected in 1469 by Ferdinand's marriage to his cousin Isabella I, Queen of Castile. Ferdinand had hoped by this alliance to obtain the Castilian crown for himself, but his high-spirited and politically astute wife firmly retained sovereign authority in her own realm.

Ferdinand and Isabella took steps to curb the power of the nobles, organising the Santa Hermandad, or Holy Brotherhood, a kind of national military police. Insistence on religious conformity was one of their basic policies. In 1478 a bull issued by Pope Sixtus IV empowered the king and queen to appoint three inquisitors to deal with heretics and other offenders against the church; this marked the beginning of the Spanish Inquisition.

The year 1492 opened with the conquest of Granada, which marked the victorious conclusion of the long struggle against the Moors. In August Christopher Columbus, sponsored by Ferdinand and Isabella, set sail from the small Spanish seaport of Palos on his epoch-making voyage to America, which was the first step in the creation of the Spanish overseas colonial empire. In 1493, by the terms of a treaty between Spain and France, Ferdinand recovered from King Charles VIII of France the ancient province of Roussillon (now forming the French department of the Pyrénées-Orientales), which Ferdinand's father had mortgaged to King Louis XI of France.

Because his daughter Joanna the Mad became insane after the death of Isabella in 1504, Ferdinand assumed the regency of Castile in 1506. He joined the League of Cambrai against the republic of Venice in 1508, and conquered Oran and Tripoli on the North African coast in 1509. He annexed the kingdom of Navarre in 1512, thereby extending the borders of Spain from the Pyrenees to the Rock of Gibraltar. Ferdinand was in many ways a competent ruler. He was succeeded by his grandson Charles (Holy Roman Emperor Charles V).

My other coin is in below link
Pirate Cob