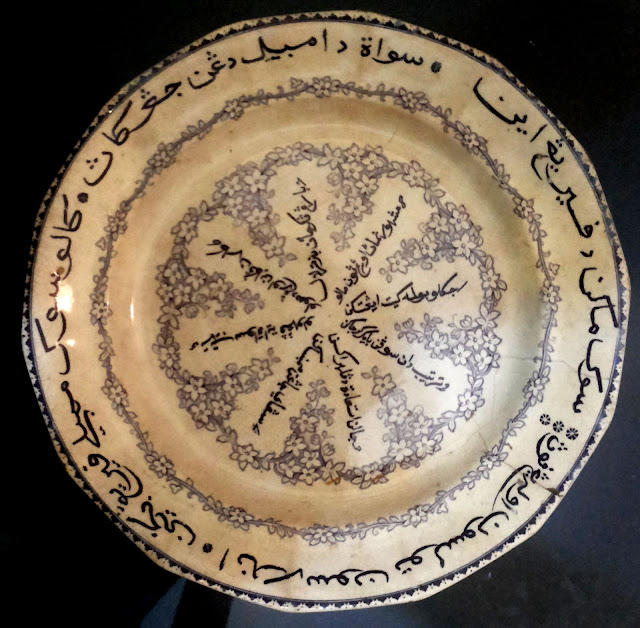 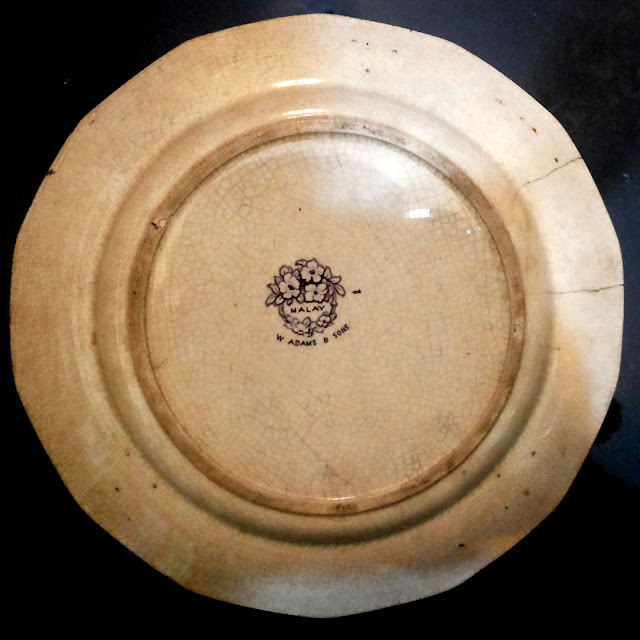 This is a priceless antique English plate decorated with Malay / Jawi motif & pantun (poems). This plate was manufactured by Williams Adams & Sons company sometime between 1819 CE to 1864 CE. This company was established in the early nineteenth century and great supplier of wares to India & the Far East. The trademark can be seen at the bottom of this plate, written W. Adams And Son under a medallion inside which is inscribed the name of the motif viz MALAY.
"The plate was printed using the process of transfer-printing, which was first used in England around 1750. The design is engraved on a metal plate, then impressed on a thin piece of paper, and transferred to the surface of the pottery or porcelain."


Anderson Tolson is probably a retailing firm in Batavia.
The pantun inscribed 8 lines converging to the centre written :


There is an interesting research & article written by Henri Chambert-Loir from Almanac Indonesia & The Malay World in regards to the this type of plate. It was quite extensive research and dug further to its origin and its design. The handwriting print on this plate belongs to Khatib Muharis. Even though his name is not printed on this plate, there are others with the same handwriting bearing his name. Diameter of this plate is 27cm
Nonetheless the article doesnt have any reference to the 8 poem lines in my plate. Does it mean the plate is rare? If you find any similar plate with the same 8 poetic lines anywhere, please let me know. I would be interested where else has the same plate.

Also thanks to A.N for helping me out figuring out some indechiperable words on this plate.