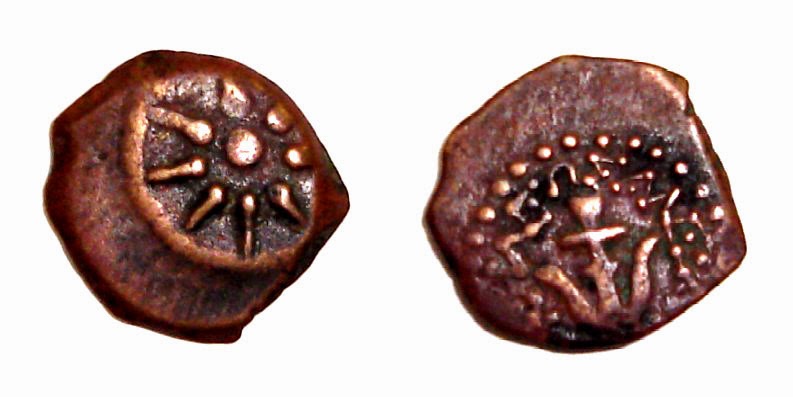 This is a bronze mite / lepton minted during the time of Alexander Jannaues, King of Judaea 103-76 BC.
According to Hendin description, this mite is identified as type 1150c, minted in Jerusalem 95-76 BC.


"Because the lepton (plural: lepta) and prutah (plural: prutot) were the lowest denomination coins that circulated in Jerusalem during Christ's lifetime, they are believed to be the coins referred to in the Biblical story of the poor widow. The lepta of Alexander Jannaeus are the most common and lowest cost possible "widow's mite" type. Although these coins were minted long before Christ's lifetime, they were still in circulation in the first century A.D. The actual size of a prutah is less than 1/2 inch in diameter. A lepton is usually about the same diameter as a pencil eraser. Since the lepton is the very smallest denomination, it is more likely the true "widow's mite." Lepta were often carelessly and crudely struck, usually off center and on small flans. Because they circulated for a long period, they are most often very worn and legends are usually illegible." ( edited ref Numiswiki)


This coin is particularly mentioned in the bible :

41 Jesus sat down opposite the place where the offerings were put and watched the crowd putting their money into the temple treasury. Many rich people threw in large amounts. 42 But a poor widow came and put in two very small copper coins, worth only a few cents.
43 Calling his disciples to him, Jesus said, “Truly I tell you, this poor widow has put more into the treasury than all the others. 44 They all gave out of their wealth; but she, out of her poverty, put in everything—all she had to live on.”
Coin Specs