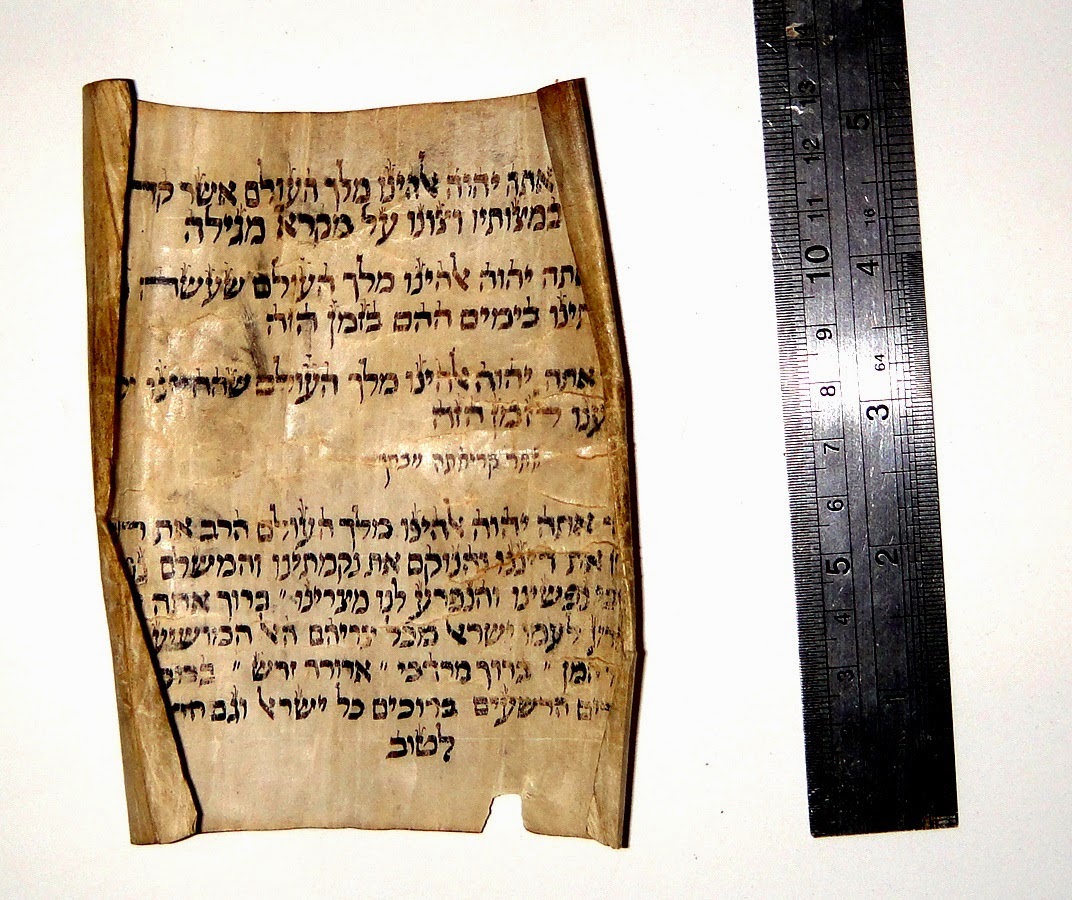 I purchased this scroll from a contact a while ago in 2014. It was written in hebrew on leather. I couldn't identify the content of this scroll. It is measured at 12cm x 13cm with blank on the recto.

However one of visitors of this website has identified this scroll contains blessings & prayers before reading the Megillah ( Ester Scroll). This recitation is done on the evening & morning of the Purim holiday. According to him there are 3 blessings are to be recited before the reading and one blessing after. Thanks Isadore.

Searching from the web, here's what I found about this blessings.

"Purim is celebrated with a public reading—usually in the synagogue—of the Book of Esther (Megillah Esther), which tells the story of the holiday. Under the rule of King Ahashverosh, Haman, the king's prime minister, plots to exterminate all of the Jews of Persia. His plan is foiled by Queen Esther and her cousin Mordechai, who ultimately save the Jews of Persia from destruction. The reading of the megillah typically is a rowdy affair, punctuated by booing and noise-making when Haman's name is read aloud.
Purim is an unusual holiday in many respects. First, Esther is the only biblical book in which God is not mentioned. Second, Purim, like Hanukkah, traditionally is viewed as a minor festival, but elevated to a major holiday as a result of the Jewish historical experience. Over the centuries, Haman became the embodiment of every anti-Semite in every land where Jews were oppressed. The significance of Purim lies not so much in how it began, but in what it has become: a thankful and joyous affirmation of Jewish survival against all odds." ( ref : Purim: Reform Judaism Web)


Blessed are You, Hashem, our God, King of the universe, Who has sanctified us with His commandments and has commanded us regarding the reading of the Megillah.


Blessed are You, Hashem, our God, King of the universe, Who has wrought miracles for our forefathers, in those days at this season.


Blessed are You, Hashem, our God, King of the universe, Who has kept us alive, sustained us and brought us to this season.


Blessing and recitations after Megillah reading


Blessed are You, Hashem, our God, King of the Universe, (the God) Who takes up our grievance, judges our claim, avenges our wrong; Who brings just retribution upon all enemies of our soul and exacts vengeance for us from our foes. Blessed are You Hashem, Who exacts vengeance for His people Israel from all their foes, the God Who brings salvation.

In Hebrew:
ברוך אתה יהוה אלהינו מלך העולם האל הרב את ריבנו והדן את דיננו והנוקם את נקמתינו והמשלם גמול לכל איבי נפשנו והנפרע לנו מצרינו ברוך אתה יהוה הנפרע לעמו ישראל מכל צריהם האל המושיע
After the nighttime Megillah reading the following two paragraphs are recited:[36]
The first one is an acrostic poem that starts with each letter of the Hebrew alphabet, starting with "Who balked (...אשר הניא) the counsel of the nations and annulled the counsel of the cunning. When a wicked man stood up against us (...בקום עלינו), a wantonly evil branch of Amalek's offspring..." and ending with "The rose of Jacob (ששנת יעקב) was cheerful and glad, when they jointly saw Mordechai robed in royal blue. You have been their eternal salvation (תשועתם היית לנצח), and their hope throughout generations."
The second is recited at night, but after the morning Megillah reading only this is recited:


The rose of Jacob was cheerful and glad, when they jointly saw Mordechai robed in royal blue. You have been their eternal salvation, and their hope throughout generations.

At night and in the morning:


To make known that all who hope in You will not be shamed (להודיע שכל קויך לא יבשו); nor ever be humiliated, those taking refuge in You. Accursed be Haman who sought to destroy me, blessed be Mordechai the Yehudi. Accursed be Zeresh the wife of my terrorizer, blessed be Esther who sacrificed for me - and Charvonah, too, be remembered for good (וגם חרבונה זכור לטוב) [for suggesting to the King that Haman be hanged on the gallows (Esther 7:9).] 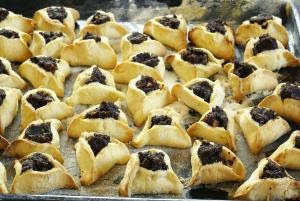 "In the Book of Esther, we read that Purim is a time for "feasting and merrymaking," as well as for "sending gifts to one another and presents to the poor" (Esther 9:22). In addition to reading the Megillah, celebrants dress in costumes, have festive parties, perform "Purim-spiels," silly theatrical adaptations of the story of the Megillah, send baskets of food (mishloach manot) to friends, and give gifts to the poor (matanot l'evyonim).

Hamantaschen
Hamantaschen are three-cornered pastries filled with poppy seeds (mohn in Yiddish), fruit preserves, chocolate, or other ingredients that are traditionally eaten on Purim.  In Israel during the weeks leading up to Purim, the aroma of freshly baked hamantaschen can be smelled on every block." ( ref : Purim: Reform Judaism web)

When I see this Hamantaschen. automatically it reminds me of similar Arabic pastries I have eaten in Turkey and Lebanon. In Lebanon similar pastry is called Fatayer mainly filled with spinach and I have seen in Turkey filled with meat & cheese.