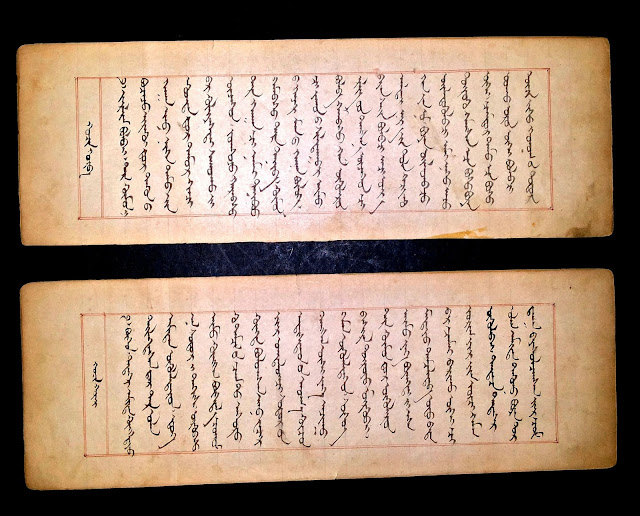 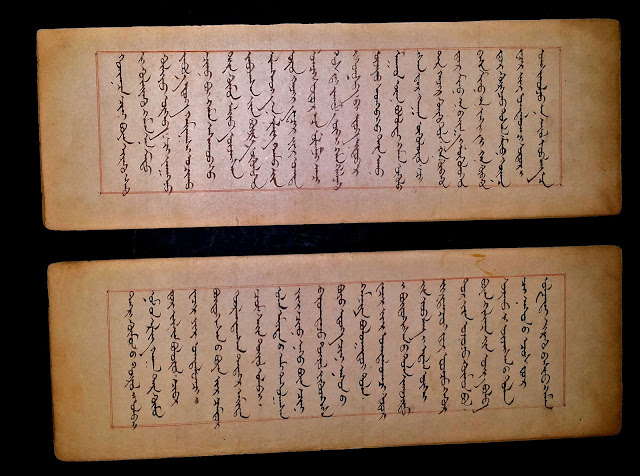 These are 2 follios from Mongolia Buddha Sutra. The thing that make these follios attractive to me is the usage of Syriac-resemblance script in most of Mongolia manuscripts.
Unlike Aramaic or Syriac script which is written from right to left, the Uighur script is written from top to bottom adapting the way Chinese scripts are written and read.

Over the last 800 years Mongolian has been written with a variety of different scripts, but the first of those and the most enduring is the one which the Mongols borrowed from the Uighurs. The Uighurs themselves had acquired this script as a result of their contacts with the Sogdian's, an Old Iranian people who had in turn borrowed their script from Syriac. Those who are already familiar with Syriac will easily see the similarities. However, where Syriac and Sogdian were written horizontally right to left, Uighur and Mongolian are written vertically left to right. According to Mongol tradition, this script was instituted at the order of Chinggis Qaghan in 1204. Many attempts were made to supplant it, with various scripts, mainly under the influence of Tibetan Buddhism and several scripts were adopted as variations of Tibetan and Sanskrit. The old script was eventually abandoned in the former Mongolian People's Republic where, in 1941, it was replaced by a variation of the Cyrillic alphabet. This loss of status has extremely weakened its position in Outer Mongolia, where generations have now grown up knowing nothing but Cyrillic; there have been attempts to revive its use, but these have not been overly successful.
However, it is still used by a relatively large section of the Mongolians living in the Inner Mongolia autonomous region of China, where the script can be found everywhere including bilingual road signs and on almost every storefront and fast-food outlet

Compare the script with Syriac script serto in my Syriac manuscripts as below :