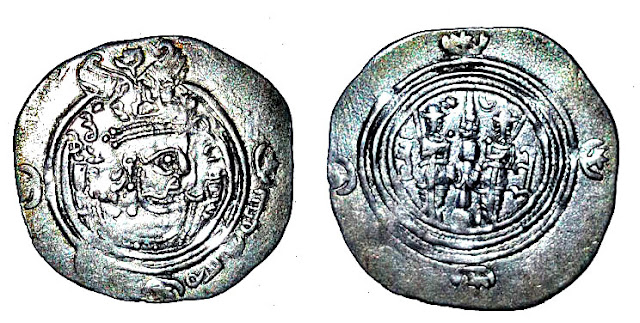 This is the first dated coin assigned to the Muslim. This coin was struck during the reign of Caliph Uthman Ibn Affan ( one of prominent companions of Prophet Muhammad pbuh) on Yazdgird III silver drachm. The date on this coin shows regnal year 20 which is the date of Yazgird III death and equivalent to 31AH ( 652 CE). All legends on both sides of this coin were inscribed in Pahlawi except the Arabic verse on the lower right margin on the obverse, بسم الله
Thing to note on this coin, the Muslim kept the Sasanian ruler name and title with the exception of adding the word Bismillah on the margin. The usage of sasanian dirhams continued till the reign of Ummayad. However during the rule of Muawiya. the Sasanian ruler names were removed and replaced with the name of Governors in Pahlawi script.
Yazdegerd III, (died 651, Merv, Sāsānian Empire) the last king of the Sāsānian dynasty (reigned 632–651), the son of Shahryār and a grandson of Khosrow II. During Caliph Umar reign, he invited Yazdgird III into Islam however he refused. When Sasanian Empire fell, Yazdgird III fled to the east and was murdered by a robber in 651CE.


This is info on Uthman Ibn Affan I get from Aisha Stacey article:

Uthman ibn Affan (may Allah be pleased with him) was the third of Prophet Muhammad’s successors.  He was known as the leader of the faithful and ruled for approximately 12 years.  The first six years were times of relative tranquillity and peace, however the last years of his reign were marred by internal conflict, and pockets of rebels trying to cause havoc throughout the Caliphate.
Prophet Muhammad (peace and blessings be upon him) praised his forbearing character and said “After Lot, Uthman is the first man who, with his wife, has given up the comfort of his home for the sake of Allah”.  After some time Uthman and Ruqiayah (may Allah be pleased with them) returned to Mecca to be with the struggling Muslims and their beloved father and Prophet (peace and blessings be upon him).
Uthman (may Allah be pleased with him) knew the Quran by heart and had intimate knowledge of the context and circumstances relating to each verse.  The Quran had been gathered during the time of Abu Bakr and was in the safekeeping of Prophet Muhammad’s wife Hafsah.
Uthman (may Allah be pleased with him) took possession of the originals and ordered some of the most trusted companions to make careful copies.  He then ordered all other unofficial copies to be burned or otherwise destroyed.  Five official copies were sent to the greatest cities of the Muslim Caliphate. Original copies exist to this day in Tashkent, Uzbekistan and the Topkapi Palace in Istanbul, Turkey.
The final six years of Uthman’s reign were marked by rebellion. Some of the governors that had been appointed during the reign of Uthman were heavy handed and to some extent unjust. In this way, the seeds of dissension spread and many of the people began to love the luxuries of life that Uthman had warned against. Conspiracies arose and it was difficult for Uthman to discern friend from foe.  He was reluctant to shed the blood of any Muslim however rebellious they may be.  Uthman (may Allah be pleased with him) preferred to persuade with kindness and generosity for he always remembered the words of Prophet Muhammad (peace and blessings be upon him):  “Once the sword is unsheathed among my followers, it will not be sheathed until the Last Day.”
The rebels called for Uthman to step down and indeed many of the companions advised him to do so.  Uthman (may Allah be pleased with him), now an old man of more than 80 years, heard the words of his beloved prophet ringing in his ears and refused to stand down from his position.  “Perhaps Allah will clothe you with a shirt, Uthman and if the people want you to take it off, do not take it off for them.”
Uthman (may Allah be pleased with him) remained true to his covenant but after a long siege, the rebels broke into his house and murdered him.  As the assassin’s sword struck, Uthman (may Allah be pleased with him) was reciting the following verse.
“So if they believe in the same as you believe in, then they have been [rightly] guided; but if they turn away, they are only in dissension, and Allah will be sufficient for you against them. And He is the Hearing, the Knowing.”(Quran 2:137)

Check and compare my other Arab-Sasanian coin below :
Caliph Muawiya Abu Sufyan Coin