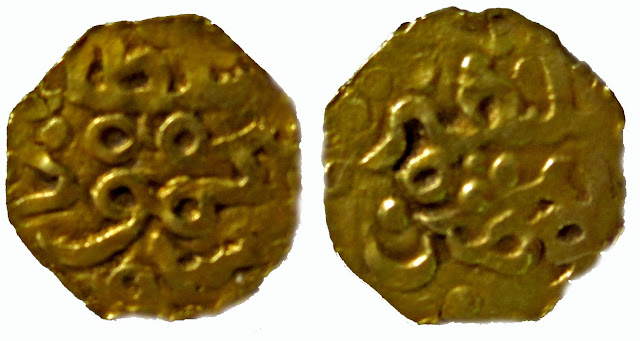 This is a gold coin from Sultan Mahmud Shah II era. He became the ruler of Johor Empire in 1685CE. He is the last Johor Sultan with Malacca Royal Line. He was murdered leaving no heir. His death is famously called " Mangkat Di Julang". Below is an excerpt from Wikipedia relating this tragedy.


"According to the book Tuhfat al-Nafis, in 1699, during the reign of Sultan Mahmud Shah II, pirates were storming the shores of southern Johor, from Mersing to Pulau Penyengat and Riau. Laksamana (Admiral) Megat Seri Rama, known as Laksamana Bentan, named after his origin, Bintan Island, was ordered to stop the menace. He left behind his beloved wife, Dang Anum, who was heavily pregnant, while he went to stop the pirate attacks.

His absence presented an opportunity to a former palace officer, who was jealous of Megat Seri Rama, to plot against him. Wan Anum eagerly craved a piece of jackfruit, taken from the palace orchard, that was on its way to be presented to the Sultan. The penghulu or the head of a sub-district, who was sending the fruit to the palace sympathised with Dang Anum. He stole a piece of jackfruit and gave it to Dang Anum. The Sultan, who noticed that the fruit had been cut, before he tasted the fruit, was so angered with the penghulu's action. His thoughts were also poisoned by the jealous palace officer who said that Dang Anum's action had obviously brought shame to the Sultan, leaving the Sultan to eat the rest of the fruit after her. The sultan ordered the women to the palace for punishment. Desperate for her life and the child she bore in her belly, Dang Anum told the sultan that the fruit that she ate was for her child. The Sultan asked for proof and the woman's belly was cut, and the child was seen with the piece of the jackfruit.

The murder was kept secret to all the palace inhabitants. Laksamana Megat Seri Rama discovered the murder of his wife and child when he returned from the war. He decided to seek revenge. On one Friday afternoon, during the Friday prayers, while the Sultan was lifted up (julang) by his men, he was ambushed and stabbed to death by the Laksamana. Before he drew his last breath, he cast a curse which forbade the sons of Bintan to touch the grounds of Kota Tinggi for eternity. If not, all of them will vomit blood to death. The Laksamana died as well as the sultan. Sultan Mahmud Syah, known then as Sultan Mahmud Mangkat Dijulang, was buried in Kampung Makam, Kota Tinggi, while Laksamana Megat Seri Rama at Kampung Kelantan, also in Kota Tinggi. To this day, people[who?] still believe that the curse still exists and most Bintanese still feared to come to Kota Tinggi. (Other versions of this story state that the curse lasts merely seven generations.)"