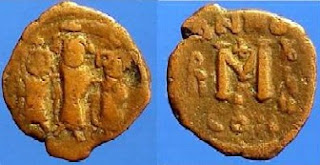 The coin was minted struck during the time of Heraclius, the famous Byzantine emperor. He has been ruling from 610 -641 AD. He lived during the time of Prophet Muhammad (saw). On 628 AD, Prophet Muhammad (saw) has sent him a letter inviting him to Islam. Unfortunately he refused but treated the letter with respect. In contrast to King of Persia, Khusro Parwez who ripped off similar invitation letter from the Prophet sent in the same year.

Byzantine emperor (r.610-41) who came to the throne in a period of crisis precipitated by Avar and Persian invasions. Reorganization of the military administration enabled Heraclius to drive the Avars out of the Balkans and the Persians out of Syria, but only after enduring a siege of Constantinople in 626. By the time of his death in 641, Greek had replaced Latin as the empire's official language and the Byzantine period had begun.


575 AD : Heraclius was born to Carthage & Epiphania
608 AD : Heraclius led a troop to Constantinople to curb rebels
Joined force with his cousin, Nicetas. Captured Cyenaica and Egypt.
Phocas beheaded.
610 AD : Became emperor on October 5th.
Married to Fabia and had a daughter, Eudocia & a son, Heraclius Constantine.
612 AD : Wife, Fabia died of epilepsy.
613 AD : Heraclius married his niece, Martina.
His marriage was never received favourably by his people or the church.

“In the name of Allah, the Beneficent, the Merciful. This letter is from Muhammad the slave of Allah and his Apostle to Heraclius, the ruler of the Byzantines. Peace be upon him who follows the right path. Furthermore, I invite you to Islam and if you become a Muslim you will be safe, and Allah will double your reward, and if you reject this invitation of Islam you will be committing a sin by misguiding your subjects. And I recite to you Allah's statement:
“O People of the Scriptures! Come to a word common to you and us that we worship none but Allah and that we associate nothing in worship with Him, and that none of us shall take others as Lords beside Allah. Then if they turn away, say: Bear witness that we are Muslims (those who have surrendered to Allah). (Qur’an: Surah 3, Ayah 64).”

630 AD : Heraclius travelled to Jerusalem and returned the Holy Cross to the city.
634 AD : Khalid Al Walid invaded Syria & defeated Theodore, Heraclius’s brother.
636 AD : War of Yarmuk occurred on 20th August resulted in a Muslim Victory.
638 AD : Heraclius supported Monotheletism ( by Sergius ) and put an edict known as Ekthesis in the narthex of Hagia Sophia. Opposed by the Orthodox, the Monophysites and Church of Rome.
641 AD : Heraclius died and left the throne to his sons Heraclius Constantine and Heraclonas, to rule jointly with Martina.
Posted by abu dervish at 12:34 AM