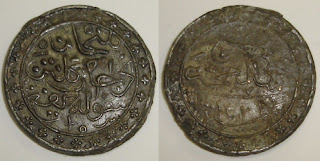 This is a tin coin from Sultan Muhammad IV era of Kelantan Sultanate. He became the sixth sultan in 1900 CE. During his reign, the transfer of Kelantan to the Straits Settlements Government in 1909 has caused the issue of all pitis or keping discontinued.

This is a quite scarce coin as I havent seen a lot of them in the market. I have seen though a lot of counterfeit coins and even used to have one of them. It looks alike as in SS22 with 4 dots in place of cross.

Though this coin is listed as common in Krause catalog but an expert in Zeno.ru said in regard to this ,
"Krause catalogue is absolutely useless reference for Malay islamic coins. Prices there are also just random. Many of coins there are drastically overvalued, while even more are critically undervalued. Besides, many of these "common" coins are impossible to locate."