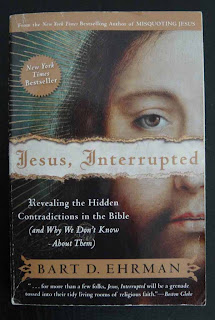 I purchased this book from The American bookstore, Amsterdam in 2011. Another controversial & revealing book from Bart D. Ehrman. Definitely recommend everyone to buy and read it.

This book is about the uncovering the contradictions in the bible and reasons behind them. Being a lecturer at Princeton Seminary, Ehrman reveals that many of the books were written in the names of the apostles by Christians living decades later, and that central Christian doctrines were the inventions of later theologians.

Interestingly Ehrman has used a historical-critical methodology in dissecting key essences from the bible. This methodology enable us to see the content without any bias nor devotion.

The author started his book by listing all major contradictions in the bible and how all pastors teaching in churches know about them but tend to ignore them due to their devotion to the so called "Inspired Scripture". Digging from early historical sources, Ehrman managed to convincingly point out the reason of these contradictions either due to human error or forgery.

Even though the 4 accepted canonical gospels - Matthew, Mark, Luke & John were long regarded as the earliest and directly related to Jesus himself, however from historical data, these books are copies of the copies and none of them were written by the apostles of Jesus. These original books were written towards end of first century and what make things worse, the content of the gospels we have now are doubtedly the same to the originals. Interestingly, comparing these 4 gospels side by side, we found that though the story line is quite similar, the essence and the doctrines are different and a lot of them are totally disagreement to each other.

He also drew a timeline since the creation of gospels till the bible was canonised, on how the early Christianity belief was misled into the creation of the Trinity Doctrine as a Nicene Creed 325CE during the reign of Constantine The Great. Though Trinity ( Pauline) followers were not the majority during the first 3 centuries,the theology battles among the churches has made Constantine unite his people and countries by choosing the faith which is closer to his former pagan belief and the pagan belief of the majority of his people.

At the end of his book, Ehrman concluded that Christianity and bible were a human creation. Even though the Bible originally was deemed inspired, the works of human hands have contaminated its original meaning and doctrine.
Posted by abu dervish at 10:00 AM