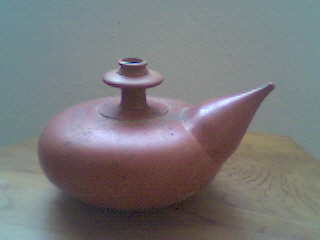 This is a museum piece antiquity from Majapahit Era ( Old Hindu Kingdom in Indonesia). Its a clay kendi (kettle) from 14th century. It is used to contain water normally a holy water for a ritual ceremony.  Its diameter about 5-1/2" inches with height of 4-1/2" inches. Majaphit Empire reigned from 1293 CE till circa 1500 CE.

Below is an excerpt from Wikipedia :

" Majapahit was a vast thalassocratic archipelagic empire based on the island of Java (modern-day Indonesia) from 1293 to around 1500. Majapahit reached its peak of glory during the era of Hayam Wuruk, whose reign from 1350 to 1389 marked by conquest which extended through Southeast Asia. His achievement is also credited to his prime minister, Gajah Mada. According to the Nagarakretagama (Desawarñana) written in 1365, Majapahit was an empire of 98 tributaries, stretching from Sumatra to New Guinea; consisting of present day Indonesia, Singapore, Malaysia, Brunei, southern Thailand, the Philippines, and East Timor, although the true nature of Majapahit sphere of influence is still the subject of studies among historians.
Majapahit was one of the last major empires of the region and is considered to be one of the greatest and most powerful empires in the history of Indonesia and Southeast Asia, one that is sometimes seen as the precedent for Indonesia's modern boundaries. Its influence extended beyond the modern territory of Indonesia and has been the subject of many studies.German orientalist Berthold Laufer suggested that maja came from the Javanese name of an Indonesian tree. "
Posted by abu dervish at 4:29 AM