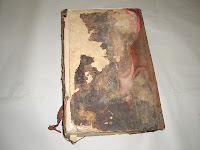 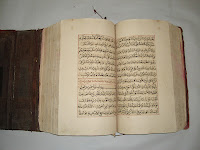 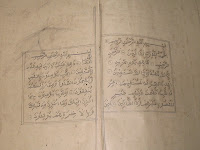 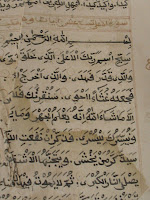 This is a written Quran manuscript originated from South East Asia. Its believed to have been written in 19th century. Few pages of these manuscripts were damaged due to ages. Some pages are missing, water stained and torn especially at bottom page near the spine. Hard cover with red fabric cover. Back cover with a flap is loose.Written in coarse Naskhi script in black ink on beige paper, 13 lines to a page. All headings are written in faded brown ink with every “ayah” or verses are separated by small black circle.
I acquired this manuscript from a friend in Indonesia quite a while ago.