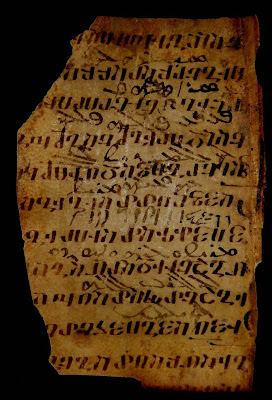 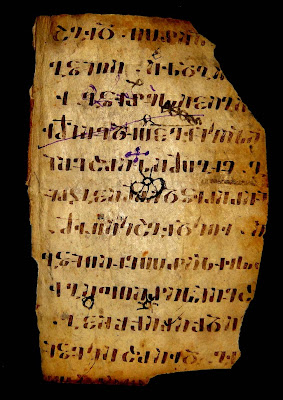 This is an unexpected and rare finding. I first spotted this leaf pasted in the inner cover of a Syriac lectionary. The script was so peculiar and totally different than the syriac script. At first I thought the leaf was made of paper and the script was written in latin. But after doing some research and googling, this script is more resemblance to Uncial Armenian. This leaf itself was made of leather and not paper as I thought. This vellum was used as a pastedown at the beginning of a Syriac lectionary manuscript. The pastedown could be taken from an older manuscript. In this case this pastedown was from vellum and it was written in uncial Armenian which was used in writing as early as 4th Century.

I welcome anyone who has any knowledge of this script & manuscript to shed some lights.

In a meantime below are some info I could dig from the internet to understand the history of this script and manuscript better.


From Wikipedia
The Armenian alphabet is an alphabet that has been used to write the Armenian language since the year 405 or 406. It was introduced by Saint Mesrop Mashtots, an Armenian linguist and ecclesiastical leader, and originally contained 36 letters. Armenian literature with pre-Mashtotsian letters was burned during the introduction of Christianity. Two more letters, օ and ֆ, were added in the Middle Ages, and Soviet reforms of the alphabet in 1922-1924 created two new letters. Until the 19th century, Classical Armenian was the literary language; since then, the Armenian alphabet has been used to write the two official literary dialects of Eastern Armenian and Western Armenian. The Armenian word for "alphabet" is այբուբեն aybuben (Armenian pronunciation: [ɑjbubɛn]), named after the first two letters of the Armenian alphabet Ա այբ ayb and Բ բեն ben. Its directionality is horizontal left-to-right, like the Latin[4] and Greek alphabets. Both Eastern and Western Armenian Alphabets include 39 letters and 36 sounds.
The invention of the alphabet (406) was the beginning of Armenian literature, and proved a powerful factor in the upbuilding of the national spirit. "The result of the work of Isaac and Mesrop", says St. Martin,[5] "was to separate for ever the Armenians from the other peoples of the East, to make of them a distinct nation, and to strengthen them in the Christian Faith by forbidding or rendering profane all the foreign alphabetic scripts which were employed for transcribing the books of the heathens and of the followers of Zoroaster. To Mesrop we owe the preservation of the language and literature of Armenia; but for his work, the people would have been absorbed by the Persians and Syrians, and would have disappeared like so many nations of the East".
The first monument of this Armenian literature is the version of the Holy Scriptures. Isaac, says Moses of Chorene, made a translation of the Bible from the Syriac text about 411. This work must have been considered imperfect, for soon afterwards John of Egheghiatz and Joseph of Baghin were sent to Edessa ( Şanlı Urfa ) to translate the Scriptures. They journeyed as far as Constantinople, and brought back with them authentic copies of the Greek text. With the help of other copies obtained from Alexandria the Bible was translated again from the Greek according to the text of the Septuagint and Origen's Hexapla. This version, now in use in the Armenian Church, was completed about 434.