As I mentioned in my earlier blog, I was ecstatic  recently due to my unexpected findings on ancient Syriac Christianity manuscripts. I found these manuscripts in my friend bazaar in Istanbul. Surprisingly these manuscripts have been sitting there for years and he never bother to sell them or show them to me knowing that my interest was only in Islamic & Quranic manuscripts.

It was just happened that I was chatting with him about the history of Arabic language and its relationship with Aramaic language. Suddenly he told me that he has some Aramaic manuscripts which were brought to him few years ago from Diyarbakir ( Eastern Turkey). Diyarbakir ancient name during Christianity era was Amida which is also one of the oldest continually inhabited cities in the world.
When I saw these manuscripts, I really thought they were written in Aramaic. I totally clueless what Aramaic script looks like but I was fascinated & interested to learn more about this script as its quite resemblance to Arabic script.
However after doing some homeworks and googling, I came to a conclusion that this manuscript was written in Syriac or Garshuni script and not Aramaic. This findings doesnt fade my interest on these manuscripts particularly my fascination is more on the script itself. So I bought some of them just for my collections and for further study on this script. I just wonder if I could incorporate Syriac script in my calligraphy work arts. Could be very interesting!! 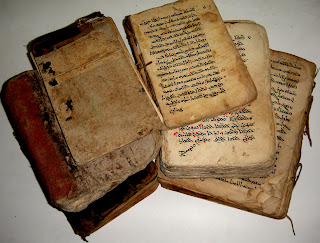 These manuscripts are quite rare as you dont see them in the market that much. I have seen people are selling just a leaf for a few hundred dollars.

Below is an excerpt from http://www.omniglot.com/ about Syriac or Garshuni scripts. From the explanation, its very obvious that these manuscripts were written in Syriac Serta Script . By comparison with the paper and execution of scripts, I would estimate these manuscripts from 12th-15th century. More info on DiyerBakir Syriac manuscripts can be found in this website

The Syriac alphabet developed from the Aramaic alphabet and was used mainly to write the Syriac language from about the 2nd century BC. There are a number of different forms of the Syriac alphabet: Esṭrangelā (ܐܣܛܪܢܓܠܐ), Serṭā (ܣܪܛܐ) and Madnḥāyā (ܡܕܢܚܝܐ).
Esṭrangelā, meaning 'rounded', is the oldest form and is considered the classical version of the Syriac alphabet. It was revived during the 10th century, and is now used mainly in scholarly publications, titles and inscriptions.
West Syriac is generally written with Serṭā, meaning 'line', which is also known as the Pšīṭā (ܦܫܝܛܐ, 'simple'), Maronite or Jacobite. It was modelled on Esṭrangelā but with simpler, more flowing lines. A version of Serṭā appeared in the earliest Syriac manuscripts, and it became popular during the 8th century.
East Syriac is usually written in the Madnḥāyā (ܡܕܢܚܝܐ, 'Eastern') form of the alphabet, which is also known as Swādāyā (ܣܘܕܝܐ, 'conversational/contemporary'), Assyrian, Chaldean and Nestorian. Madnḥāyā is closer to Esṭrangelā than Serṭā.

Aramaic, a Semitic language that was the lingua franca of much of the Near East from about 7th century BC until the 7th century AD, when it was largely replaced by Arabic. Classical or Imperial Aramaic was the main language of the Persian, Babylonian and Assyrian empires and spread as far as Greece and the Indus valley.
After Alexander the Great destroyed the Persian Empire, Aramaic ceased to be the official language of any major state, though continued to be spoken widely. It was during this period that Aramaic split into western and eastern dialects.
Aramaic was once the main language of the Jews and appears in some of the Dead Sea Scrolls. It is still used as a liturgical language by Christian communities in Syria, Lebanon and Iraq, and is still spoken by small numbers of people in Iraq, Turkey, Iran, Armenia, Georgia and Syria.
Aramaic has also been written in versions of the Latin, Hebrew and Cyrillic alphabets, though the Syriac is the most widely used script to write Aramaic. 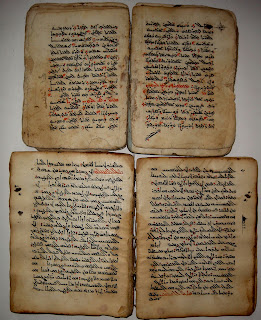 Syriac (ܠܫܢܐ ܣܘܪܝܝܐ leššānā Suryāyā), an eastern dialect of Aramaic spoken by Christians in the lands in between the Roman and Parthian empires between the 1st and 12th centuries. Syriac is still used used nowadays as ritual and literary language by speakers of Neo-Aramaic in Syria. It is also used for sermons in Syrian churches in the southern Indian state of Kerala. Syriac has also been written with the Uyghur alphabet. 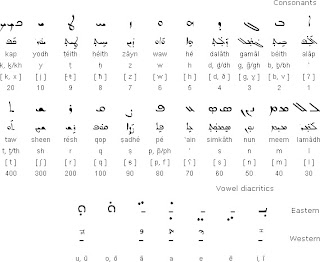 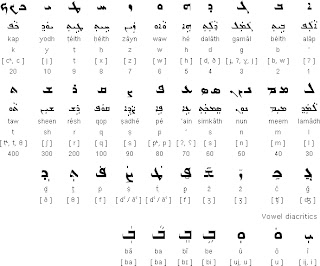