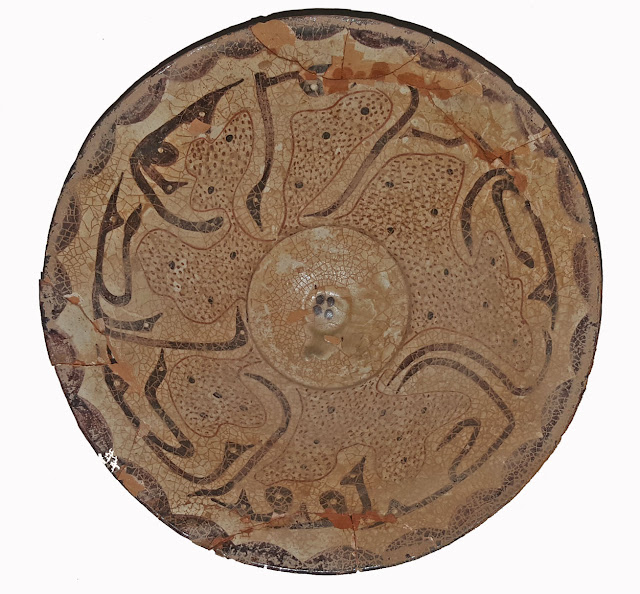 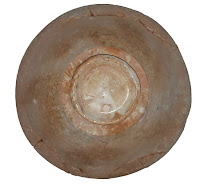 This is a large bowl originated from Samanid period (10th-11th Century) possibly Khurasan. This deep bowl with straight flaring wall was covered with a white slip and then glazed with a transparent colorless glaze. This white slip provided the base for the calligraphic works.
The calligraphy was executed in a black pigment derived probably from Manganese as it looks purplish when examined closely.
The decoration on this bowl is purely epigraphic using Kufi like Arabic script around the rim, simple yet quite illegible.
The Samanids ruled large parts of Eastern Iran, Afghanistan & Central Asia from 819-1005 CE. The Samanids were the first native dynasty to rule Iran after the Arab conquests in the 7th century.
In dating this bowl, I am using guidelines outlined by Volov in her article, Plaited Kufic on Samanid Epigraphic Pottery. She classified the development of the epigraphy on Samanid pottery in 3 stages. The third stage according to her the pottery decoration is purely epigraphic, almost illegible and has a "Swan's Neck Curve" feature on the inscription, dating this feature to early 11th Century.
It is very challenging to read the calligraphy on this pot, I welcome any feedback from viewers on this.
However the most typical phrases on Samanid pottery is Say : Al Jud Min Akhlaq Ahl Al Janna,  “Generosity is the disposition of the dwellers of Paradise. Good fortune.”

The tradition of decorating pottery with epigraphy is very interesting.
The art of writing on pottery was mentioned in a 10th century manuscript of Muhammad Al Washsha from Baghdad titled Kitab Al Zarf Wal Zurafa ( The Book of Elegance and Elegant People). He wrote about the list of literary epigraphy inscribed on personal items such as cups, bowls, plates, etc. Hence by the time this manuscript was written, the tradition of inscribing epigraph was already prevalent during the time of Abbasid period.
When the Samanids in power in 10th century, it seemed they tried imitate Abbasids one except with their own style.
In my previous entry, I have also written about similar tradition of decorating epigraph on Malay & Chinese pottery. See below link for further readings :
Malay Plate 01
Malay Plate 02
Qing Talismanic Plate
Qing Blue & White Plate
Blue & White Plate
Swatow Plate