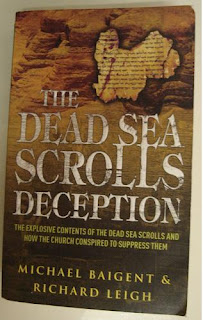 I purchased this book from Border bookstore, Rundle Mall in 2008. This is a very interesting & controversial book. It was written by Michael Baigent & Richard Leigh. I would recommend you to buy and read this book with open mind then only then you could understand the messages conveyed.

This book is about the discovery of the Dead Sea Scrolls from Qumran, Jordan and how its discovery has led to manipulation & exploitation by certain group of people - religiously & politically.

The writers have revealed how the people in charge in deciphering & restoring the scrolls attempted to hide the truth of the deciphering results in order to comply with the order of the Catholic church- Vatican.

These scrolls were carbon dated circa 1st century CE and not preChristian era. Hence the content of these scrolls are much closer to the original teachings of the Judaism as well as the earliest Christian Jews. Surprising to see that there is a lot of disagreement in contents if we were to compare these scrolls with our current Old testament.

This book also talked about the Essenes, the group of people who deemed owner of these scrolls. There are few views who this Essene is. Traditionally, Essenes is referred as a deviated sect in Judaism whom keeping aloof from the rest of the Judiasm society. However with the evidences of the archaelogical excavation & the content of these scrolls, the definition of this Essenes needs to be reviewed. The writers strongly believed that this Essenes sect is none other than the early Christians ( mainly from Jews background) who try to save their faith & scrolls from being contaminated by the Pagan Roman in jerusalem & "Pauline" Christians. They were also believed to be the follower of James ( Jesus's brother). During early Christianity there was a conflict in teachings between James's & Paul's. Paul was deemed trying to contaminate the true teaching of Jesus by instilling the divinity of Jesus and abandoning the practice of the Judaism Law.
In one of the scrolls - Habakkuk Commentary, there is narration about few characters such as "Teacher of Righteousness", "Liar" * "Wicked Priest". Since it's common in Jew tradition not to single out name, the authors of this book believed that this narration is about the conflict that happened during the early Christian era. Based on the similarity of the events in this narration and the conflict between James & Paul, they believed "Teacher of Righteousness" was referred to James, whereas "Liar" was referred to Paul and "Wicked Priest" was meant for Ananas.
In short , the discovery of the Dead Sea Scrolls is really a blow to the modern Christianity. There are numerous places in Modern Bible which are not comformant with these scrolls. The core teaching of Modern Christianity is totally different than the core teaching of the early Christians. We knew there was a conflict between James & Paul during this era. James, brother of Jesus, and has been an ardent follower of Jesus during his time, tried to keep Jesus teaching as it was but was prosecuted as well as his followers. Whereas, paul, has never seen Jesus and never became jesus follower during his life, even prosecuted early Christians, just happened to repent and claimed to see Jesus in his day-dream ordering him to spread Christianity. He managed to pull a larger crowd towards Christianity with his own intrepretation though suffered some prosecutions at early stages. His doctrine & teaching was canonized during the Council of Nicaea in 325 C.E and from then on it became the standard accepted "Pauline" Christianity a.k.a Catholic.
Posted by abu dervish at 2:26 PM