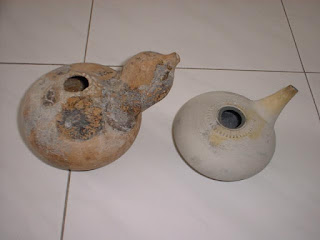 These are museum piece antiquity from Majapahit Era but found in Malacca ( Malaysia). They are clay kendi (kettle) . They are used to contain water normally a holy water for a ritual ceremony. Its diameter about 3 to 4" inches with height of 2 to 3" inches.
I would date these kendis sometime in 14th century. The reason because Malacca prior to 1409 CE was a Hindu state i.e one of Majapahit's vassal. However when the first Malacca ruler Parameswara married to a princess of Pasai sultan, he became Muslim and almost entire population in Malacca became Muslim as well. Hence the locals must have not continued using these kendis after 1409 CE as they are practically used for Hindu ceremony.