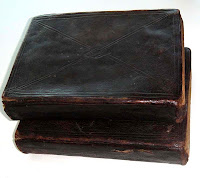 These are beautifully written Quran manuscripts originated from Etiopia. Its believed to have been written in 18-19th century. This manuscript is written in Sudanese type calligraphy in black ink on western paper 11 lines to a page. I still need to do more research about this type of calligraphy. It looks in between Sudani & Somali calligraphy but definitely stemmed from Maghribi style. Brown leather binding beautifully embossed in a middle with a flap. The borders of the pages are ruled with double line red . 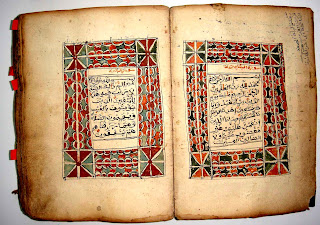 The first manuscript which contains the opening Surah Al Fatihah has the first 2 pages beautifully decorated.


There are supposed to have 3 manuscripts ( 30 juzs) for the complete Quran. However I only managed to acquire 2 manuscripts out of 3.
No date but it is estimated written in 18-19th century. There are numerous prayers and notes written on blank pages between main text and cover. There is a note stating the owner of this Quran is Kamil Bin Qasim (baladah Irkawi ?)from Har Etiopia.
This is a very rare acquisition because we dont see many Etiopian Quran in the market or in international hands. I am blessed to have acquired these manuscripts.
In recent christie's auction on Oct 2014 in London, a similar Quran was sold for USD5223 ( Sale 5526 Lot 367)
Look my other Etiopian Qurans as below links: