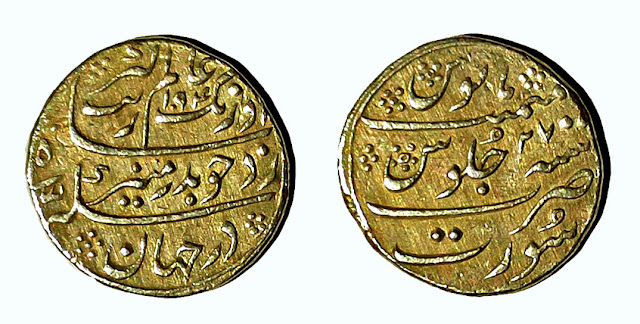 This is a silver coin or denominated as Rupee from the time of Emperor Aurangzeb Alamgir of Mughal Empire who reigned India from 1658 - 1707 CE. The coin dated 1094 AH i.e on the Emperor 27th regnal year.

Below is an excerpt from Wiki :

Abul Muzaffar Muhi-ud-Din Muhammad Aurangzeb (14 October 1618 – 20 February 1707), commonly known as Aurangzeb Alamgir and by his imperial title Alamgir ("world-seizer" or "universe-seizer") and simply referred to as Aurangzeb was the sixth Mughal Emperor and ruled over most of the Indian subcontinent during some parts of his reign. His reign lasted for 49 years from 1658 until his death in 1707.
Aurangzeb was a notable expansionist and during his reign, the Mughal Empire temporarily reached its greatest extent. During his lifetime, victories in the south expanded the Mughal Empire to more than 3.2 million square kilometres and he ruled over a population estimated as being in the range of 100–150 million subjects, with an annual yearly tribute of £38,624,680 in 1690 (the highest in the world at that time).
Aurangzeb's policies partly abandoned the legacy of pluralism, which remains a very controversial aspect of his reign. Rebellions and wars led to the exhaustion of the imperial Mughal treasury and army. He was a strong-handed authoritarian ruler, and following his death the expansionary period of the Mughal Empire came to an end, and centralized control of the empire declined rapidly.

Historically, Akhbar was the first Mughal emperor who issued coins with Islamic Syahada till 1585 CE. However during the reign of Aurangzeb, he forbade the use of the Islamic Syahada on coins. His coins used poetic verses to praise his rule on the obverse and the reverse had a formula that was copied by all succeeding Mughals including the regnal year of the Emperor along with the name of the minting town.