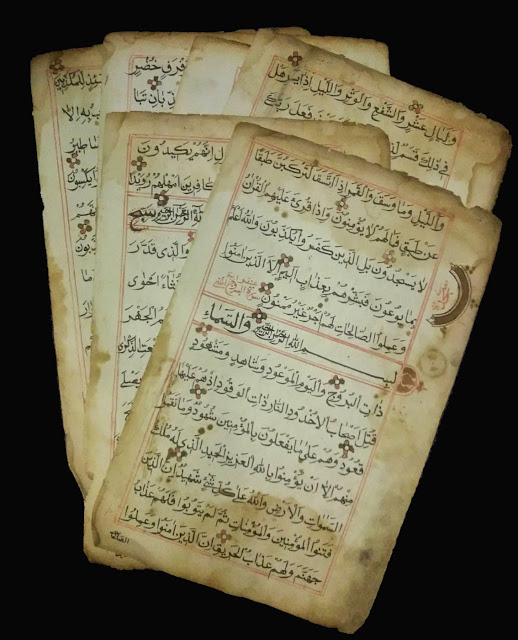 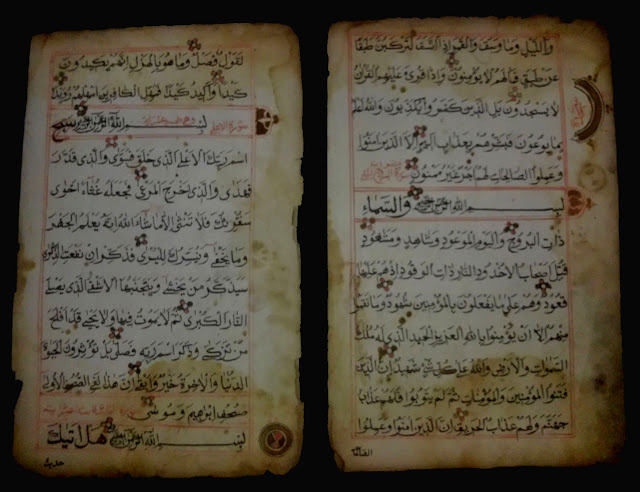 When I first started collecting, I purchased these large size Quran leaves from a seller based in Lebanon. He claimed these Quran leaves from Mamluk's.
However years after the purchase and I get to handle and to see different types of Quran, I could strongly dismiss this claim. From the design, paper and calligraphy used, these leaves are from Central Asia possibly Daghestan.
This is the same seller who convinced me to buy an old Quran which he claimed from Kashmir but I found out not so long after that it was from Central Asia as well. The same seller cheated me twice, Oh dear!! But that was a while ago when I was so naive in collecting and my knowledge on ancient Quran manuscripts almost to nothing.
The leaves of the Quran in this posting are of Central Asia based on below criteria :
1) Large Dimension typically 330/340 mm  x 210/220 mm
2) Western paper was used whereas most Mamluk's Quran on oriental paper
3) Simple Naskh was used whereas Mamluk's more towards Muhaqaq or Rayhan.
4) Natural water colored whereas Mamluk Quran normally is luxurious with gold illumination.
5) The heading is with Naskh khat whereas in Mamluk's the heading will be written with different khat such as Thuluth
6) The multicolored disc on margin is more native to Central Asia and surrounding area.