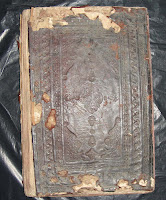 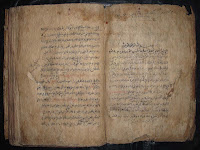 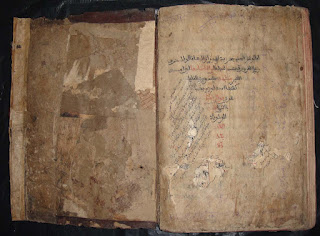 This is a written manuscript about Arabic grammar originated from South East Asia. Its believed to have been written in 18-19th century. Few pages of these manuscripts were heavily burrowed due to ages. Material used is Daluang paper.
Dluang (or Daluang) paper is a traditional paper made in the Indonesian region. It is a strong and very fibrous type of paper.  It  manufactured from the bark of the indigenous saeh tree.  The paper is somewhat coarse and displays natural defects (holes, thin spots and irregular edging).  When new, this paper is a light cream-colored brown.  In the the humid climate of the region, it darkens as it ages and will rot.
I acquired this manuscript from a friend in Indonesia quite a while ago.