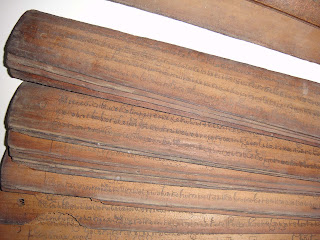 This is a very interesting type of manuscript. The origin of this manuscript is Bali island, Indonesia. The script is called abugida, a derivation of old kawi script was written on  "lontar" leaf.
Lontar leaf derives from the palmyra species of palm, Borassus flabellifer, which is common in Indonesia. In Balinese, the palmyra palm is named "tal" ( deriving from "tala", the sanskrit name for the talipot palm), and this is reflected in the term "lontar", which is an inversion of the word "rontal" meaning "leaf" (ron) of the "tal tree" (tal).
Both sides of lontar leaf provide a writing surface. An iron stylus called a pangutik is used to inscribe the writings on the leaf surface.
I dont have any information about the content of this lontar manuscript but I believe its about the beliefs and ritual laws of Balinese.
Each leaf is 16" in length and 1" in width. There are total of 37 leaves and sandwiched by  2 flat boards called " cakepan". These cakepans are made of bamboo.
( Reference : Illuminations The Writing Traditions of Indonesia)