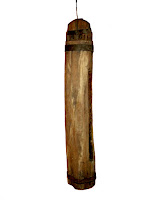 This is a traditional malay wooden bell or tabuh / beduk/ keraton hanged usually under the mosque  roof eaves beam or truss. This beduk is struck with a piece of wood to create a loud sound to remind the Muslim the prayer time, Iftar time,  and sometimes any Islamic event taking place in the mosque.
Nowadays most of the mosques have utilized the speaker system hence this tradition of striking the beduk is being abandoned. A few of them still have the beduk but only in use during Ramadhan or Eid.
This beduk was a gift from my brother in law who acquired it from his village. The age of this beduk is at least 50 years old.
Its length is about 3.5 feet & 1 ft in width. There is a vertical opening about 2 feet at the middle of this wooden bell to create the sound when bell is struck. I couldnt tell from which tree this beduk was made.
Posted by abu dervish at 2:17 AM