This is a silver akche coin from the reign of Sultan Mehmed II also known as Mehmed the Conqueror of the Ottoman. He is the Sultan who finally ended the Byzantine Empire with the capture of Constantinople in 1453 CE. 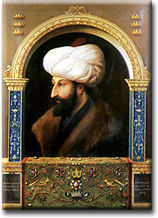 Byname MEHMED FATIH (Turkish: Mehmed the Conqueror) (b. , , --d. , Hunkârçayiri, near Maltepe, near ), Ottoman sultan from 1444 to 1446 and from 1451 to 1481. A great military leader, he captured and conquered the territories in and the Balkans that comprised the 's heartland for the next four centuries.

His father, Murad II, abdicated in his favour when Mehmed was 12 but reclaimed the throne two years later in the aftermath of a Christian Crusade. Mehmed regained the throne when his father died (1451) and began to plan the conquest of (Istanbul), the feat for which he is most renowned. In 1453 he captured the city and undertook returning it to its previous level of grandeur. In the next 25 years he conquered large sections of the Balkans. Under his reign, criminal and civil laws were codified in one body of law; he collected a library of Greek and Latin works and had eight colleges built.