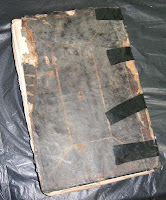 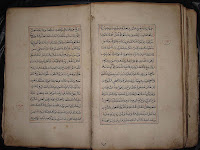 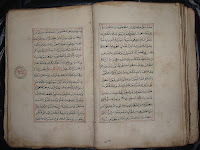 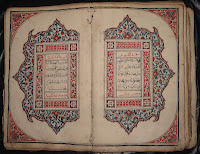 This is a beautifully written Quran manuscript originated from South East Asia. Specifically it could be from Sulawesi island judging from the design which is typical of its kind. Its believed to have been written in 18-19th century. This manuscript is written in Malay calligraphy. However few pages from the beginning and the ending of this manuscripts are missing. In the middle of the manuscript particularly the beginning of surah AL Kahf, the pages were illuminated with beautiful colors. Looking at this manuscript, I almost thought it was from Terengganu of origin. However Dr Annable Gallop advised me that this manuscript most probably from Sulawesi due to its design. The covers of this Quran were believed to be original but they were loose and were taped to the outer spine. The cover is made of thin brownish leather and is glued on a hard board. I acquired this manuscript from a friend in Indonesia last year.