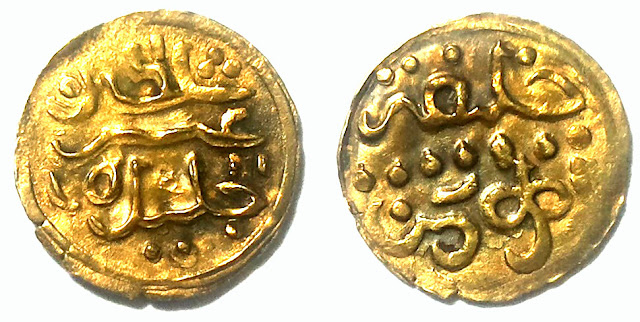 This is a round gold kupang from Sultan Abdul Jalil Riayat Shah II era (1571-1597 CE).
In the obverse, its written Sultan Abdul Jalil Shah and reverse Khalifatul Muminin.
In Saran Singh's this ruler's kupang is labelled as SS9 however in an octagonal shape. There is no reference in Saran's referring to this kupang as a round shape.
In Malaysian Numismatic Heritage book page 93, this round kupang is specifically labelled for Sultan Abdul Jalil Riayat Shah II whereas in a booklet published by Bank Negara Malaysia, Johor Currency Heritage,page 17, this round kupang is stated as unique with a comment that this is type of coin is not recorded in any Malaysian coin catalogue and was believed clipped to be round from its original octagonal form.


Johor is located in the southern tip of Peninsular of Malaysia as well as the most southern point of the Asian Continent. The name of Johor originated from the Arabic word Jawhar which means jewel. It is also known by its Arabic honorific, Darul Takzim ( Abode of Dignity). The Sultanate of Johor was founded by Sultan Alauddin Riayat Shah II , the son of exiled last Sultan of Malacca ( Sultan Mahmud Shah) in 1528 CE. Johor was part of Malaccan Sultanate prior to Malacca occupation by Portuguese in 1511 CE.