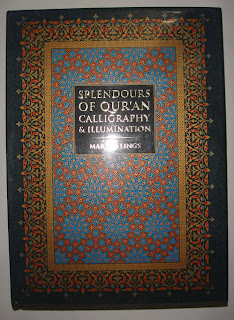 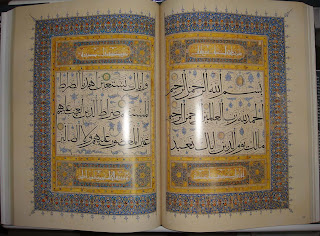 This is one of the best books describing the art & calligraphy of antique Quran. It explains the history of the calligraphy evolution in brief. However the ebst part of this book is the plates of selected beautiful antique Quran pages in color. This is an excellent book especially for Quran collector as a reference.
Dr Martin Lings is a famous English Muslim writer. See below excerpt from Wikipedia about him.
Martin Lings (also known as Abu Bakr Siraj Ad-Din) (January 24, 1909 – May 12, 2005) was an English Muslim writer and scholar, a student and follower of Frithjof Schuon[1], and Shakespearean scholar. He is best known as the author of a very popular and positively reviewed biography, Muhammad: His Life Based on the Earliest Sources, first published in 1983 and still in print.
Lings was born in Burnage, Manchester in 1909 to a Protestant family. The young Lings gained an introduction to travelling at a young age, spending significant time in the United States due to his father's employment. Lings attended Clifton College and went on to Magdalen College, Oxford, where he gained a BA in English Language and Literature. At Magdalen, he was a student and then a close friend of C. S. Lewis. After graduating from Oxford Lings went to Vytautas Magnus University, in Lithuania, where he taught Anglo-Saxon and Middle English.

For Lings himself, however, the most important event whilst at Oxford was his discovery of the writings of the René Guénon, a French metaphysician and Muslim convert, and those of Frithjof Schuon, a German spiritual authority, metaphysician and Perennialist. In 1938, Lings went to Basle to make Schuon's acquaintance and he remained Frithjof Schuon's disciple and expositor for the rest of his life.[citation needed]

In 1939, Lings went to Cairo, Egypt, in order to visit a friend who was an assistant of René Guénon. Not long after arriving in Cairo, his friend died and Lings began studying Arabic. Cairo became his home for over a decade; he became an English language teacher at the University of Cairo and produced Shakespeare plays annually. Lings married Lesley Smalley in 1944 and lived with her in a village near the pyramids. Despite having settled comfortably in Egypt, Lings was forced to leave in 1952 after anti-British disturbances.[citation needed]

Upon returning to the United Kingdom he continued his education, earning a BA in Arabic and a PhD from the School of Oriental and African Studies (University of London). His doctoral thesis became a well-received book on Algerian Sufi Ahmad al-Alawi (see Sufi studies). After completing his doctorate, Lings worked at the British Museum and later British Library, overseeing eastern manuscripts and other textual works, rising to the position of Keeper of Oriental Printed Books and Manuscripts 1970-73. He was also a frequent contributor to the journal, Studies in Comparative Religion.

A writer throughout this period, Lings' output increased in the last quarter of his life. While his thesis work on Ahmad al-Alawi had been well regarded, his most famous work was a biography of Muhammad, written in 1983, which earned him acclaim in the Muslim world and prizes from the governments of Pakistan and Egypt. His work was hailed as the "best biography of the prophet in English" at the National Seerat Conference in Islamabad.[2] He also continued travelling extensively, although he made his home in Kent. He died in 2005.

In addition to his writings on Sufism, Lings was a Shakespeare scholar. His contribution to Shakespeare scholarship was to point out the deeper esoteric meanings found in Shakespeare's plays, and the spirituality of Shakespeare himself. More recent editions of Lings's books on Shakespeare include a foreword by Charles, Prince of Wales.[citation needed] Just before his death he gave an interview on this topic, which was posthumously made into the film Shakespeare's Spirituality: A Perspective. An Interview With Dr. Martin Lings[3].
Posted by abu dervish at 11:04 PM