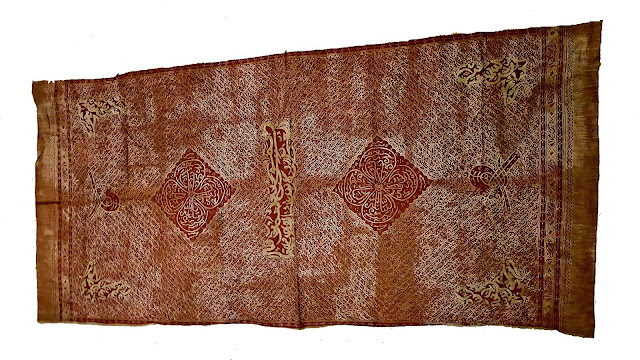 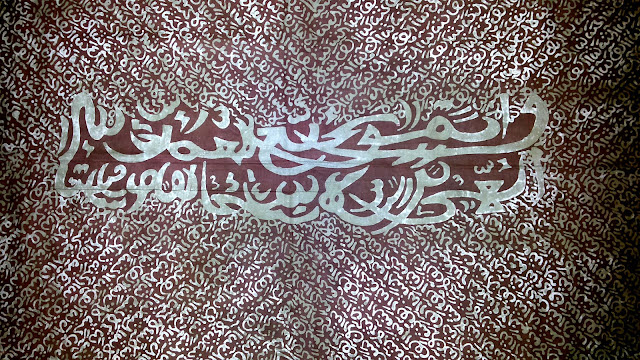 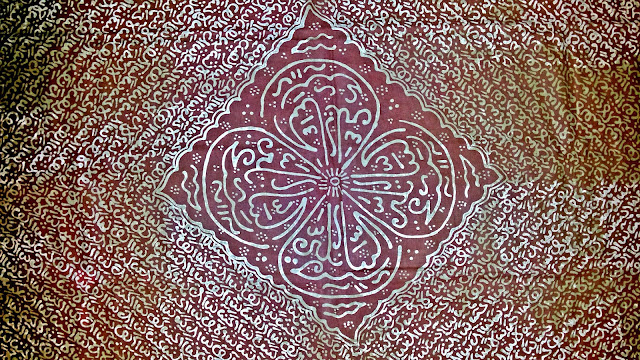 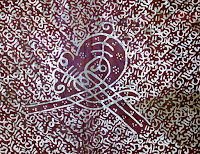 This is a very rare "Batik Bertulis" / " Kain Arab" or Calligraphic Batik. It is a long rectangular batik cloth made of cotton dyed in light brown with Arabic inscriptions.
The batik making requires several stages of waxing and dyeing in order to produce beautiful colors and designs. Though the art of dyeing first appeared in ancient  Middle East & Far East , the batik making is very specific to Java Island after the dyeing skill has been transferred to Southeast Asia.

According to Mohd Taib Osman in his book Islamic Civilization in the Malay World, after the establishment of Islamic rule in Cerebon (West Java) from 16th Century onward, the testimony of faith has been expressed into batik making. Batik in the form of long shawl, head cloth and ceremonial hangings were decorated with Quranic inscriptions.

For this particular sample, the calligraphy is almost illegible most likely painted by illiterate makers or served as talismanic purposes.The type of khat used most likely Thuluth.
I have tried my best to decipher some of the calligraphy and I welcome any comments.

This inscription is located at the middle of the cloth. It is very difficult to make out the phrase however I think it is the proclamation of Islamic Syahadah.

As for the shape of this calligraphy is formed, I believe this is a shape of a coffin. It could mean that this cloth is used to cover a coffin especially of a noble and an important person. 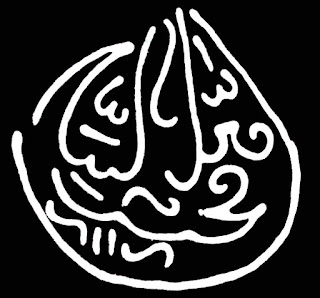 Another calligraphy form which is located at both end of the cloth clustering around like a flower is also indecipherable.I have extracted the form as above. However I think it is صلى الله على محمد which means Praise of Allah onto Muhammad. 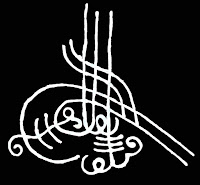 Another calligraphy form as above is of a Tughra of Ottoman Sultan like in most other Batek Bersurat. Michael Rogers, a curator for Khalili Collection identified the tughras as the signs of the Ottoman Sultan, Abdul Hamid II ( 1876-1918). 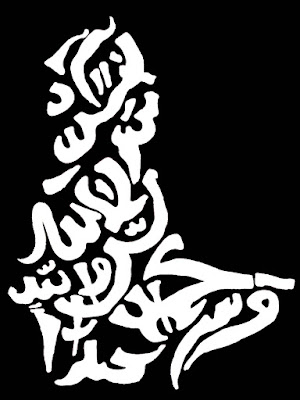 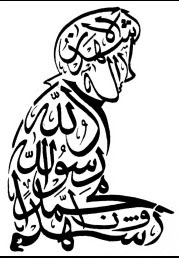 As for the human form calligraphy in a prayer sitting position, I could match it with another well known calligraphy as a comparison. This calligraphy is also  Islam faith testimony.

As for the background calligraphy, comparing to some other cloths which I have seen in the catalog. The inscriptions are most probably :

So the scribbles could be imitating this inscriptions.
Although these scribbles almost impossible to decipher, either the makers are illiterate or the purchasers unable to read Arabic, this was irrelevant. The message conveyed by this cloth is crystal clear that the owner is a Muslim and he/she purchased this cloth either for a talismanic purpose or  Islamic related ceremony.

This piece was used predominantly as a shawl or as a shroud . It can also serve as men's head cloth or "ikat kepala". Another usage might be as ceremonial hanging or wrapper for a Quran. It was found in Indonesia and most likely was produced there. The Quranic verses and prayers on the cloth are believed to have properties that would protect the wearer from sickness or injury

In a similar Calligraphic batik depicted in The Message & The Monsoon Catalog, page 115, dated 19-20 Century, this rectangular and long cloth is also know as Kerudung in Java. It means a shroud which was worn around the head, shoulder or body. It could be also used as a temporary cover for coffin or tomb as well as ceremonial hanging and banner.

In the book of Crescent Moon : Islamic Art & Civilization in Southeast Asia, the history of the production of this cloth is discussed in lengthy by Robyn Maxwell. Though the production of  textile with Islamic calligraphy started prior to 19th century, the calligraphy design on batik produced in Java between late 19th to early 20th century was at peak due to the accessibility of commercially woven cotton cloth.

Ceremonial or Calligraphic batik is very rare to find. In an auction at Christie's, 3 similar batiks were sold at USD3358 under sale number 5682 dating them from late 19th century to early 20th century. Below is the link