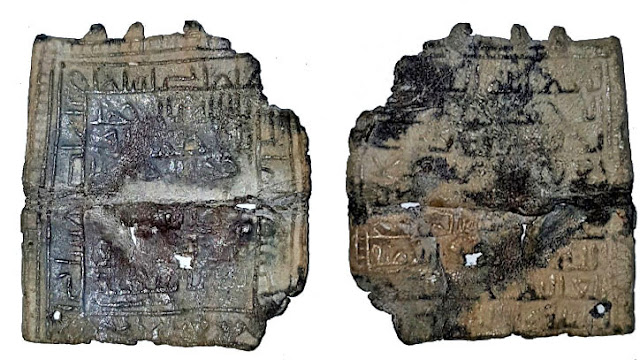 This is a very rare acquisition of a lead amulet from the era of Muslim Andalusia Spain. It is made of lead and originally was folded to contain a scroll with prayers. Both sides are inscribed with Quranic verses in Kufi script. This amulet was worn to ward off evil spirit. Based from some references, this amulet is dated back from 11th-12th Century of Almoravid Dynasty.
I couldnt decipher entire inscriptions. I could only read some text and guessing the rest. I hope anyone who has sharp eyes can help me with this inscription.

The reverse of this amulet, tentatively I could read :


بسم ألله الرحمن الر
حيم شَهِدَ أللَهُ أنّه
لا إله إلّا هو و الملا
ئكة و أُوْلُوا العلم
قآئِما بالقسط لا إله
إلّا هو العزيز
الحكيم
En:
Say, "He is Allah , [who is] One,
Allah , the Eternal Refuge.
He neither begets nor is born,
Nor is there to Him any equivalent."
Allah witnesses that there is no deity except Him, and [so do] the angels and those of knowledge - [that He is] maintaining [creation] in justice. There is no deity except Him, the Exalted in Might, the Wise.
Item : Tasliman / Amulet
Content : Quranic verses
Dim : 30mm x 25mm
Date : 11th - 12th Century CE
Material : Lead
Origin : Andalusia, Spain
Posted by abu dervish at 12:55 PM