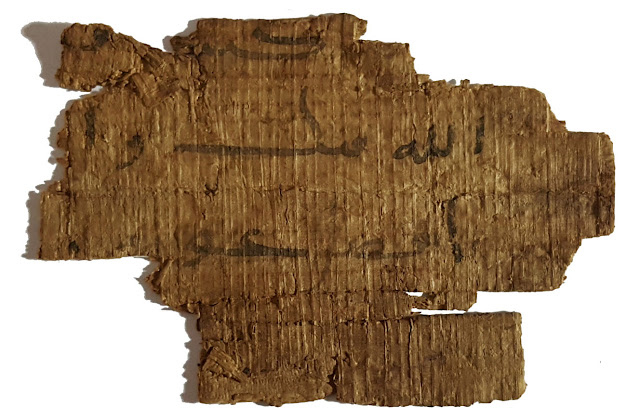 This is a very interesting papyrus fragment. The fragment is only 70mm x 50mm and the writing is almost unreadable except the word الله . This could be a letter fragment or part of Quran verses.
I purchased this fragment from USA with Certificate of Authenticity that its from 8th Century CE.

The tricky part is to date this fragment. Since to test this fragment with Carbon Dating is very expensive, the other way to determine its age is with paleography.

As we know that papyrus has been in use in Egypt since few thousand years prior to the coming of Islam. When the Arab took control of Egypt in the 7th Century CE, the usage of papyrus as a medium of writing continued until the 10th Century CE , then the paper started becoming the main source.
Hence we can estimate this fragment dated between 7th - 10th Century CE.
Now lets look at the calligraphy. From the first instance it seemed to me that the script belonged to same family with Hijazi-Kufi script due to its angular shape and less cursive shape.

Geoffrey Khan in his writing on The Development of Early Arabic Document Script characterized the script written on Egyptian papyri from 3rd century AH onward shows a significant increase in the cursive tendencies whereas the earlier papyri is written in more angular shape and utilized a variety of archaic letter forms that resemble Hijazi script from early literary manuscripts.

Browsing through an Arabic Papyrus handbook, I tried to match the calligraphy with some dated papyrus to estimate tentatively the time it was written. I found a strikingly similarity in calligraphy execution between this fragment with papyrus Papyrus E17861 which according to Historian Fred Donner was written sometime in 7th Century CE.

Below are the letters comparison made with Papyrus E17861. Note the letter ك at the beginning  and at the end of the word, the letter ع , the letter ر and lastly the word الله .
Further explanation of these archaic letters are covered by Geoffrey Khan in his paper mentioned earlier above. 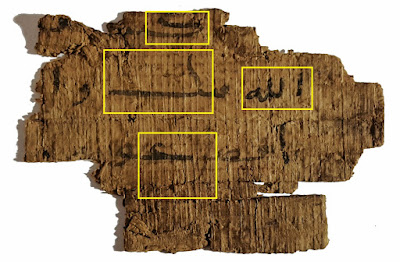 This fragment doesn't give too many clues due to it small size, however based on this paleography study, I could safely assume that this fragment is written in most likely in pesudo Hijazi / transitory Hijazi if not Hijazi and from 7th -8th Century CE.
I welcome any feedback on this fragment.